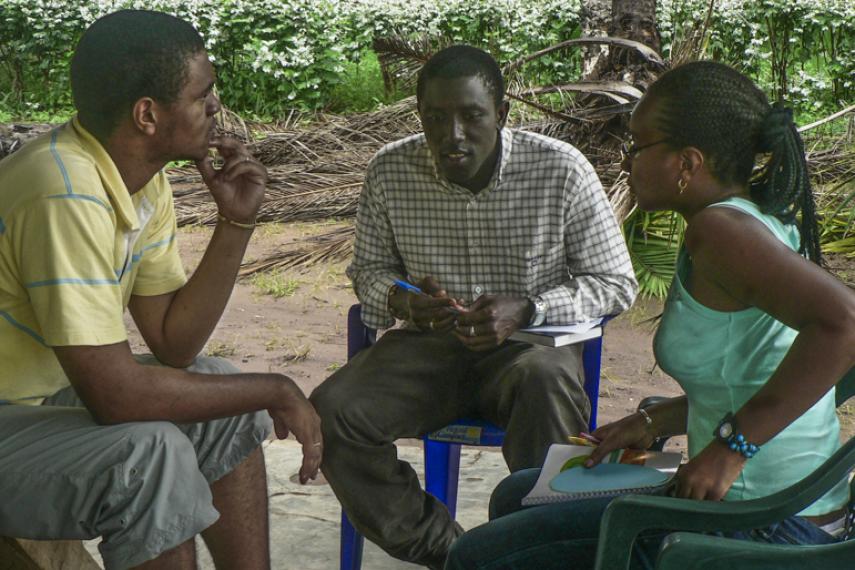 In September of 2008, staff member Rachel Gouin travelled to Guinea-Bissau to meet with young organizers who are building a better future for their country. The following is an excerpt from Rachel's trip report.

I made my way to the youth drop-in centre, located on a backstreet of the capital city of Bissau. Twenty young people had quietly gathered and greeted me shyly. Didier, who had invited us, introduced me and explained that part of my work in Canada involves raising funds for Inter Pares' social justice programs. I had come to this tiny West African country to share experiences with young organizers and facilitate a workshop on how to garner human and financial resources for social justice work.

As a starting exercise, I asked participants to draw images of the challenges they face and the vision they have for the future.

Joâo, a young man who works to promote culture through traditional music, dance and theatre, tells us how, when the only music school in Bissau closed, former students, including himself, created an association called Netos de Amizade (“Grandchildren of Friendship”) and began introducing children to their cultural heritage. The first image Joâo drew was of a burning plant, illustrating the loss of tradition. The second image, his vision for the future, was of a pirogue (a fishing boat). “In this pirogue,” he said, “we are at the helm.”

Inter Pares has worked with the Bissau-Guinean organization, Tiniguena, for close to 20 years. Every two years, Tiniguena organizes an exchange bringing young people from the capital of Bissau to other regions of the country. The goal is to deepen their appreciation for their country's biological and cultural diversity so that they will work to preserve it. “What you know and love, you will protect,” Tiniguena staff members say. When participants return to the city, they organize fundraising activities to support a community project in the area they visited. One year they raised money to repair a school's roof that was in such poor condition that it was threatening to collapse during the rainy season. Ten years later, the school is still standing, and members of the community remember the young people who helped make this happen.

The communities are not the only ones to benefit. The exchange program also builds leadership among participants. Many have remained active with New Generation of Tiniguena (GNT), conducting research and education on issues such as the food crisis. Others have joined neighbourhood youth associations to improve living conditions in areas such as sanitation, education and culture. It is these young people who gathered with me that morning to share stories and learn from each other.

The youth I met during my trip have many challenges to overcome, including a lack of material resources, and the fact that many of their colleagues are leaving to study abroad. But some are returning, and the optimistic vision they have for their country is unwavering. Their work does not appear to be a weight they carry but a joy at the possibility of a better world, one they have an active role in creating.

Sharing Inter Pares' experience of building Canadian political and financial support for social change was a learning experience for me. Tiniguena's work has helped create a generation of activists working to improve their own lives and communities. Bissau-Guineans' own contributions to youth associations demonstrate their ownership and commitment to seeing this generation succeed. In this nexus of joint action and learning, Canadian and Bissau-Guineans meet in a global movement of social solidarity.

The youth I met during my trip have many challenges to overcome but the optimistic vision they have for their country is unwavering. Their work does not appear to be a weight they carry but a joy at the possibility of a better world.