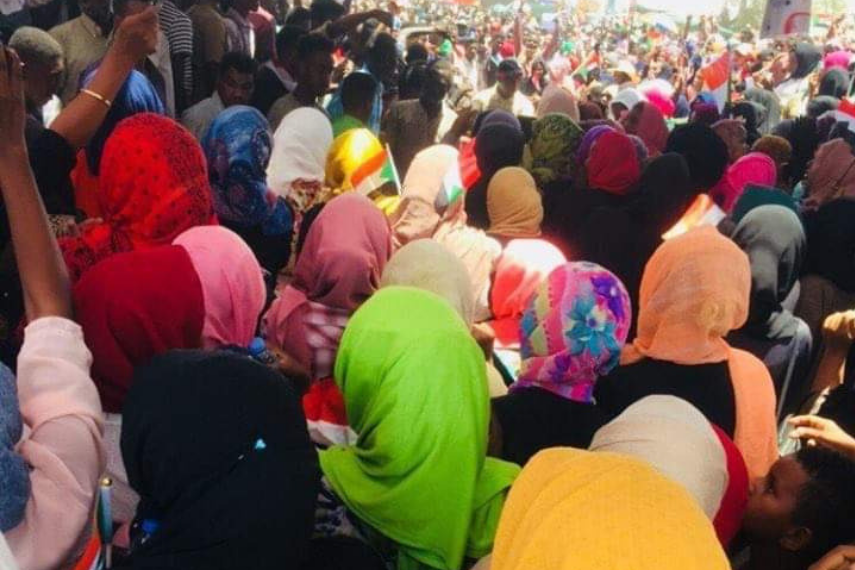 On June 2, 2019, militia forces enacted a brutal crackdown on pro-democracy protesters in Sudan, dashing any immediate hope of a peaceful transition to civilian rule. It has shattered dreams, and left death and destruction in its wake.

Although activists in Sudan are both devastated and defiant in light of the dismantling of many of the protests, one thing is clear: women will continue to play an important role on the ground in the country’s revolution, and in seeking their own freedom from a wider patriarchal society.

In late 2018 and early 2019, thousands of ordinary citizens peacefully marched across Sudan, demanding an end to oppression. Non-violent occupations took place in front of army headquarters. The movement was met with resistance, but even as military and paramilitary forces continued to threaten and, in some cases, kill protesters, highly organized and participatory demonstrations continued.

The demonstrations lead to the fall of a dictator who had held power for 30 years. In the spring of 2019, negotiations began for civilians to share power. From a kleptocratic state that ruled its people with fear and violence, there was finally, as women’s rights activist Asha El-Karib put it, “A future for the country.”

Women, like Asha, have been central in this revolution. In addition to participating in every aspect of the movement, they have been highly visible protesters, leaders, and mobilizers. Who can forget the viral image of the young woman in white chanting revolutionary slogans with abandon. Though there are those moments of triumph, they belie the price women in Sudan have paid for their involvement. They have been harassed, beaten and jailed. They have put their very bodies and lives on the line.

The current context for women in Sudan was and is extremely difficult. They experience discrimination in both the private and public spheres. For example, the law requires women to have a male guardian’s permission to work or travel abroad. One third are married before the age of 18. And a specific set of public order laws enforced by special public order police brutally control what women wear. The women’s movement in Sudan has long protested their inequality. For them, this revolution is not just about democracy, it is about ending the underlying patriarchal structures that foment misogyny.

Inter Pares has supported incredible women’s organizations in Sudan for over a decade and a half – and in that time, they have, despite all odds, organized, educated and advocated for their rights. Their simple survival throughout years of oppression and hostility has been a feat. We understood this when in 2014, The Salmmah Women’s Resource Center, an Inter Pares counterpart, was shut down by the government of Sudan because of its outspoken director and groundbreaking work.

This revolution has channeled the anger and frustration of the women’s movement in Sudan as well as their hopes. “We can even call ourselves feminist,” – a term that was both laden with stigma and dangerous – said Asha whose organization, the Sudanese Organization for Research and Development (SORD), is an Inter Pares counterpart.

Yet despite their central role in the streets, women were barely present in any of the formal negotiating bodies, or as formal parts of the proposed transitional government structures. This time, it was their own movement and the men at its helm who were shutting them out. “It was expected but we are deeply disappointed,” said Asha about this struggle within a struggle. She also proclaimed, “We are not going back.” The women’s movement will continue to organize and shape a revolution that recognizes the autonomy and respects the agency of women.