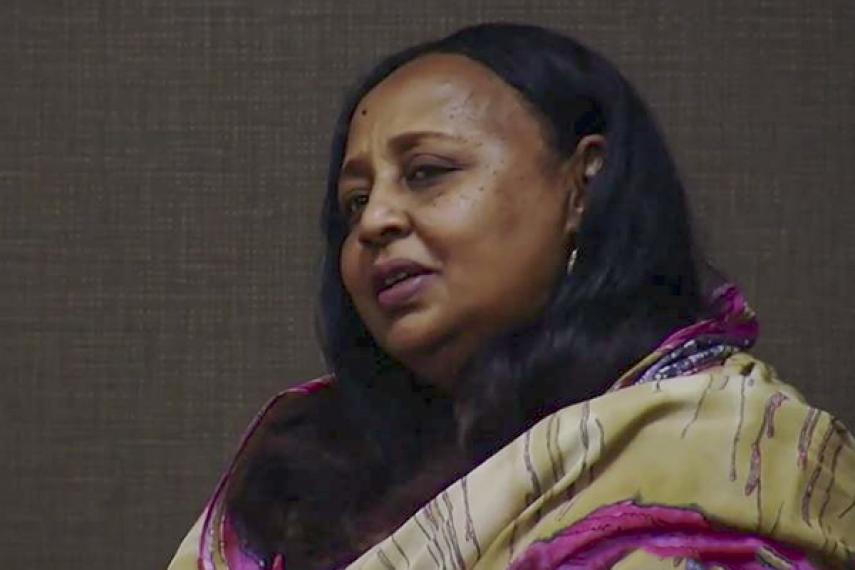 When Asha El-Karib speaks about life in Sudan, a country devastated by more than 40 years of civil war, she tells a story of despair but also of hope, a story of people longing for peace and justice. Asha is a mother, a professional, and a feminist activist, deeply engaged in rebuilding civil society in Sudan. She is also the Senior Strategic Advisor of the Sudanese Organization for Research and Development (SORD).

As a young woman in the Sudanese Women's Union (an organization since dismantled by the government), Asha began to learn about the many ways in which women were excluded and oppressed in society. Her post-doctoral research explored the role of women in agriculture and food security – a role that has long been invisible throughout the world. Gradually, Asha's interest in women's political rights moved to an interest in women's social and reproductive rights.

Asha's deep commitment to improving women's lives led her and a group of other activists to create the Gender Centre for Research and Training in 1997. After leaving the Gender Centre, she continued her activism through the creation of SORD. SORD engages in national policy debates on women's rights, human rights, peace building, and poverty. They have been particularly active in supporting a network of legal clinics that provide serves to poor women who have faced violence and discrimination, as well as working to change Sudan’s Family Law, which notoriously legally enshrines sexist and harmful attitudes.

Asha recognizes the universality of women's subordination, the importance of sharing and documenting women's experiences, and of linking with women's organizations internationally. As the leader of various research initiatives, relating to issues such as domestic violence in Sudan, women in Darfur, and sexuality, Asha made an important contribution to breaking silences and overcoming social taboo in a society that denies that discrimination and violence against women exists.

Asha has also been reaching out to international women's organizations and networks that are working on issues of importance to all Sudanese women, such as women's reproductive rights, particularly the practice of female genital mutilation – a practice that is reviled and condemned by women internationally.

Before the separation of North and South Sudan in 2010, when Asha spoke about the negative impacts of Sharia law on both Muslim and Christian women in the north and south of Sudan (now Sudan and South Sudan), she insisted that they had to act together to promote democracy and equality for women in the whole of Sudan. As a feminist, Asha dreams of "breaking down the many boundaries and barriers – gender, ethnic, class, religious, geographic – that stand in the way of women's unity and the transformation of society."

Asha's faith in women to bring about change is strong, and her leadership - in both her personal and professional life – brings strength and hope to others.
In May 2004, The Gender Center for Research and Training (GCRT) in Sudan, which Asha co-founded, was presented with the Betty Plewes Fund – 2004 Award. Created by the Canadian Council for International Cooperation, the Fund provided a $15,000 grant to an African non-governmental organization engaged in research and policy development on issues of priority to women. In accepting the Award, Asha wrote:

From the bottom of our hearts and from the heart of Africa we extend our hands to take yours in love, hope and solidarity. Our belief and faith in making the world a better place to live – in peace and equality – has never failed us despite the pains and wounds and despite the repression and injustice. We at the Gender Center, shoulder to shoulder with the democratic movement in Sudan, maintain and nourish an egalitarian vision of a new united Sudan – stable, secular, democratic, at peace and with fraternity within its colourful diversity. We thank you, we are honoured for receiving this Award; and we promise to continue our struggle and activism.