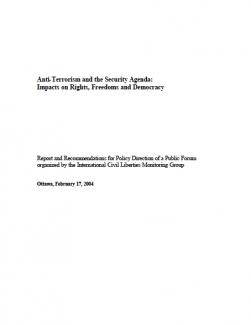 Under pressure and influence of the United States, many countries, including Canada, have adopted or revived laws and measures to increase surveillance of the lawful conduct of their citizens. Fundamental rights and basic civil liberties are being eroded under the guise of the so-called “war on terrorism” which targets primarily members of Arab and Muslim communities and increasingly puts at risk immigrants and those seeking protection from political strife and persecution.

In Canada, the Anti-Terrorism Act (Bill C-36), as the Patriot Act in the United States and the Anti-Terrorism and Security Act (ASTA) in the United Kingdom, was quickly adopted following the Sept. 11, 2001 attacks. Bill C-36 has given police extraordinary powers of preventative arrests that are now being used to threaten and coerce members of visible minorities to “cooperate” with them. This new omnibus law extends and institutionalizes the practice of “secret evidence” to be used in “secret trials” already permitted under provisions of the Immigration and Refugee Protection Act. It grants a sole cabinet minister the power to issue “security certificates” which can be used to detain non-citizens indefinitely or deport them.

Anti-terrorism legislation around the world, along with previously adopted immigration legislation and regulations, has contributed to an increase in racial profiling and institutionalized racism. Guilt by association has had a chilling effect on the fundamental rights of freedom of expression, freedom of association and freedom of movement as well as on the basic democratic rights to protest and to simply assert one’s rights.

Canada, which has always prided itself for its policy of official multiculturalism and its human security policy, has followed the lead of the US and of the UK in replicating and expanding the most controversial parts of their laws designed to wage war on terrorism.

Those tough measures, which include the reversal of the burden of proof, contravene Canada’s Charter of Rights and Freedoms and the International Covenant on Civil and Political Rights (ICCPR) which it ratified, argues Warren Allmand.

And contrary to the infamous 1970 War Measures Act, Bill C-36 and other legislation, are open-ended. The war on terror has no real sunset clause. The trend embodied in the anti-terrorism agenda could modify the Canadian justice and judicial system permanently. It forms a complex web of far-reaching measures that are changing forever the relationship between the State and its citizens.