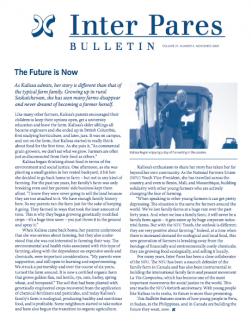 The future is now

For many years, Inter Pares has been a close collaborator of the National Farmer Union. The NFU has been a staunch defender of the family farm in Canada and has also been instrumental in building the international family farm and peasant movement La Via Campesina, which has become one of the most important movements for social justice in the world.

As part of a coalition called MOTIVE, Salmmah is launching a campaign promoting policies against sexual harassment on campuses. By combining the experience of older activists with the innovation and emerging leadership of young women, Salmmah aims to promote campus environments that respect women’s rights, while supporting young women to take their place in the Sudanese women’s movement.

Likhaan: Taking it to the streets

The slums of Metro Manila are not easy places for anyone to live. This is true especially for young people, whose yearning for the “good life” they see presented in the media runs up against the grinding poverty in which they live.   It is in these neighbourhoods where Inter Pares’ counterpart, Likhaan, has formed a strong and vibrant youth organization known as PiLaKK Youth.

Dig In! is an interactive workshop that explores the concept of food sovereignty.

REDFAH was founded in 2004 by a group of young professionals who were among the first participants of the Diploma and Leadership School on Human Rights, Governance, and Democracy offered by a coalition of Inter Pares’ counterparts. As Fanny Cusi, one of REDFAH’s founding members, explained, “We wanted to create a space to continue our reflections sparked by the training and share our new knowledge with other young people.”