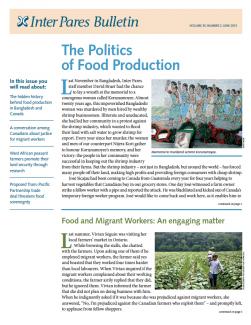 The Politics of Food Production
While we can try to eat as ethically as possible, achieving justice for food producers goes beyond individual consumer choices. The roots of the problems lie deeper – in our trade systems, in our immigration policies, in the increasingly corporate nature of agriculture, and in our economies that have come to rely on cheap food.

Inter Pares’ “Just Work?” campaign, explores the connections between the food we eat and the workers who travel each season from their homes in the global South to produce it.

Inter Pares is coordinating a research collaboration that brings together the West African farmer movement COPAGEN and researchers from the Université de Montréal. For the next three years, farmers and researchers will work together to document the scale of recent land grabs in nine West African countries and the impact on food security and community livelihoods.

Under an “investor-state” dispute mechanism in the Trans-Pacific Partnership (TPP), corporations can sue governments if they pass laws, policies, or regulations that infringe on companies’ current or future profits. Already, countries, including Canada, that signed on to trade agreements with identical mechanisms have paid millions to corporations as “compensation” in these disputes.  Inter Pares has grave concerns of the effect of trade agreements such as the TPP on agriculture, in both the North and the South.