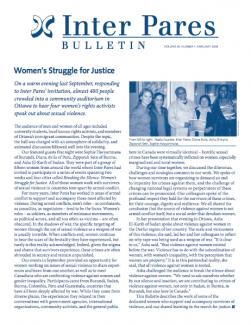 For many years, Inter Pares has worked in areas of armed conflict to support and accompany those most affected by violence. During armed conflicts, men's roles - as combatants, as casualties, as negotiators - tend to be the focus. Women's roles - as soldiers, as members of resistance movements, as political actors, and all too often as victims - are often obscured. In the shadows of war, the specific targeting of women through the use of sexual violence as a weapon of war is usually invisible. When conflicts end, women continue to bear the scars of the brutality they have experienced, but rarely is this reality acknowledged.

When Diana Avila, Project Counselling Service's (PCS) Executive Director, left Ottawa last September to travel back to Peru, little did she know that one week later, she would be celebrating a historic day in Peru's quest for justice. After years of work, human rights defenders had succeeded in persuading the Chilean Supreme Court to extradite former Peruvian president Fujimori to his home country. There he would face charges of human rights violations and corruption stemming from his decade of authoritarian rule, which spanned the latter half of Peru's twenty years of armed conflict.

Women’s League of Burma: Confronting the continuum of violence

The global outcry against the systematic use of rape as a weapon of war in Darfur has brought more pressure on the Sudanese government and the international community to address the situation. However, Sudanese women's organizations, who are working to heal communities torn apart by armed confrontation, still face incredible obstacles when trying to work with women affected by sexual violence in camps around Khartoum, or in the other regions of Sudan where conflict still reigns.

Acting on what we know

While the patriarchal societies we live in are shaped by different forms of control and oppression, and while our struggles are diverse, the goal of ending violence against women is global.