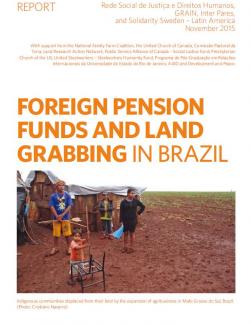 Swedish, US and Canadian pension funds have acquired farmlands in Brazil by way of a Brazilian businessman accused of using violence and fraud to displace small farmers. These pension funds are also using complex company structures that have the effect of evading Brazilian laws restricting foreign investments in farmland.

The pension funds have been investing in Brazil through a global farmland fund called TIAA-CREF Global Agriculture LLC (TCGA). The fund is managed by the US-based Teachers Insurance and Annuity Association-College Retirement Equities Fund (TIAA-CREF). Those investing in the fund include TIAA-CREF, the Second Swedish National Pension Fund (AP2) and the Caisse de dépôt et placement du Québec (CDP) and the British Columbia Investment Management Corporation (bcIMC) of Canada.

These pension funds have refused to disclose detailed information about the farmlands acquired by TCGA, saying that this is “competitive information.” They maintain, however, that their investments are in full compliance with the Principles of Responsible Investment in Farmland, which were co-founded by TIAA-CREF and AP2 (See Box 1: TCGA’s principles for “responsible” farmland investment).

The lack of public information about the location of TCGA’s farmland investments in Brazil has prevented previous independent investigations from assessing TCGA’s investments. In our investigations, however, we were able to access public documents identifying several farms purchased by a company created specifically to channel TCGA’s investments in Brazilian farmland. While this information was not sufficient to determine the exact location of most of these farms or to verify their existence, it did allow us to identify four farms in the southern parts of the states of Maranhão and Piauí, where land conflicts and land grabbing are rife. Further investigations revealed that some of the farms that TCGA acquired in these areas were owned by the companies of a Brazilian businessman, who is the subject of several criminal investigations, before being sold to TCGA. This businessman is accused of resorting to an illegal and often violent process of land grabbing referred to in Brazil as “grilagem”

Our investigations also uncovered how TCGA uses a complex company structure that effectively evades Brazilian laws restricting foreign investment in farmland. Aside from these apparent violations of Brazilian legislation, our investigations show that TCGA’s investments in Brazilian farmland are contributing to a larger process of land speculation and expansion of industrial agriculture plantations that are fueling land grabbing, environmental destruction, labour exploitation and numerous social and health calamities across rural Brazil.

Our investigations suggest that TCGA has not followed its own internal standards, and has not pursued the “rigorous due diligence process” for its Brazilian land acquisitions that it claims to have followed. As TIAACREF, the manager of TCGA, is the world’s most significant institutional investor in farmland and a leading actor both in encouraging other pension fund managers to invest in farmland and in developing internal standards for such investments, the findings of this report raise serious doubts about the ability of pension funds to achieve any "responsible” investments in farmland.
TIAA-CREF, AP2, the Caisse de dépôt et placement du Québec, bcIMC and the other pension funds invested in TCGA are misleading the pension holders whose retirement savings they manage by claiming that their investments in farmland are “responsible”. They should immediately take measures to divest from their farmland investments and ensure that the lands they have already acquired are securely returned to the local communities.
Download (pdf 1.52 MB)