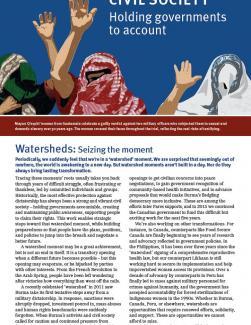 Periodically, we suddenly feel that we’re in a ‘watershed’ moment. We are surprised that seemingly out of nowhere, the world is awakening to a new day. But watershed moments aren’t built in a day. Nor do they always bring lasting transformation.

Tracing these moments' roots usually takes you back through years of difficult struggle, often frustrating or thankless, led by committed individuals and groups. Historically, the most effective protection against dictatorship has always been a strong and vibrant civil society – holding governments accountable, creating and maintaining public awareness, supporting people to claim their rights. This work enables strategic steps toward that watershed moment, while building preparedness so that people have the plans, positions, and policies to jump into the breach and negotiate a better future.

A watershed moment may be a great achievement, but is not an end in itself. It is a transitory opening when a different future becomes possible – but this opening may evaporate, or be hijacked by parties with other interests. From the French Revolution to the Arab Spring, people have been left wondering after victories how everything then went off the rails.

A recently celebrated ‘watershed’ in 2011 saw Burma take its first tentative steps away from a military dictatorship. In response, sanctions were abruptly dropped, investment poured in, mass abuses and human rights benchmarks were suddenly forgotten. When Burma’s activists and civil society called for caution and continued pressure from foreign governments, outside ‘experts’ declared that criticism would undermine progress.

Five years later, the world struggles to understand why Rohingya Muslims are still fleeing violence, why armed conflict still continues, and how the military still wields power despite democratic elections. But civil society in ethnic conflict zones continues to work under the radar, successfully exploiting very limited openings to get civilian concerns into peace negotiations, to gain government recognition of community-based health initiatives, and to advance proposals that would make Burma’s fledgling democracy more inclusive. These are among the efforts Inter Pares supports, and in 2015 we convinced the Canadian government to fund this difficult but exciting work for the next five years.

We’re also working on other transformations. For instance, in Canada, counterparts like Food Secure Canada are finally beginning to see years of research and advocacy reflected in government policies. In the Philippines, it has been over three years since the ‘watershed’ signing of a comprehensive reproductive health law, but our counterpart Likhaan is still working hard to secure its implementation and help impoverished women access its provisions.  Over a decade of advocacy by counterparts in Peru has finally led to cases against military personnel for crimes against humanity, and the government has accepted accountability for forced sterilizations of Indigenous women in the 1990s. Whether in Burma, Canada, Peru, or elsewhere, watersheds are opportunities that require renewed efforts, solidarity, and support. These are opportunities we cannot afford to miss.

Inside this Annual Report, you’ll find examples of Inter Pares' work with counterparts worldwide building toward moments of opportunity, negotiating through them, and most importantly, making them yield lasting results. Some of these moments are occurring right now; some have transpired, and some are on their way. Together, we can make them happen – and we can make the change stick.