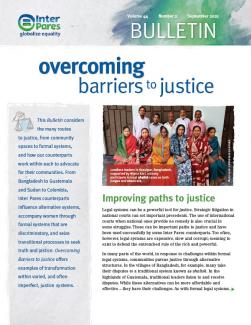 This Bulletin considers the many routes to justice, from community spaces to formal systems, and how our counterparts work within each to advocate for their communities. From Bangladesh to Guatemala, and Sudan to Colombia, Inter Pares counterparts influence alternative justice systems, accompany women through formal systems that are discriminatory, and seize transitional justice processes to seek truth and justice. Overcoming Barriers to Justice offer examples of transformation within varied, and often imperfect, justice systems.

Legal systems can be a powerful tool for justice. Strategic litigation in national courts can set important precedents. The use of international courts when national ones provide no remedy is also crucial in some struggles. These can be important paths to justice and have been used successfully by some Inter Pares counterparts. Too often, however, legal systems are expensive, slow and corrupt; seeming to exist to defend the entrenched rule of the rich and powerful. Read how Inter Pares counterparts in both Bangladesh and Guatemala are influencing alternative justice systems, and over time, improving them.

For many people, legal questions only arise when there is a problem, and the only solution is recourse to the justice system. Shouldn’t access to justice go beyond conflict resolution and demonstrate equality, as expressed above by Pierre Noreau, professor in the Faculty of Law at the Université de Montréal?Inter Pares and our counterparts believe that the answer is yes. Read how we promote social justice by facilitating access to the formal justice system.

Colombia’s fifty years of armed conflict has left gaping wounds across the country, some of which are only recently coming to light. Colombia Diversa, Inter Pares’ counterpart, has played a key role in exposing how all armed actors specifically targeted LGBTIQ+ persons, resulting in a staggering 4,000 LGBTIQ+ victims. Read how Colombia Diversa is promoting healing and providing practical tools to empower LGBTIQ+ victims and survivors to share their stories and access justice.