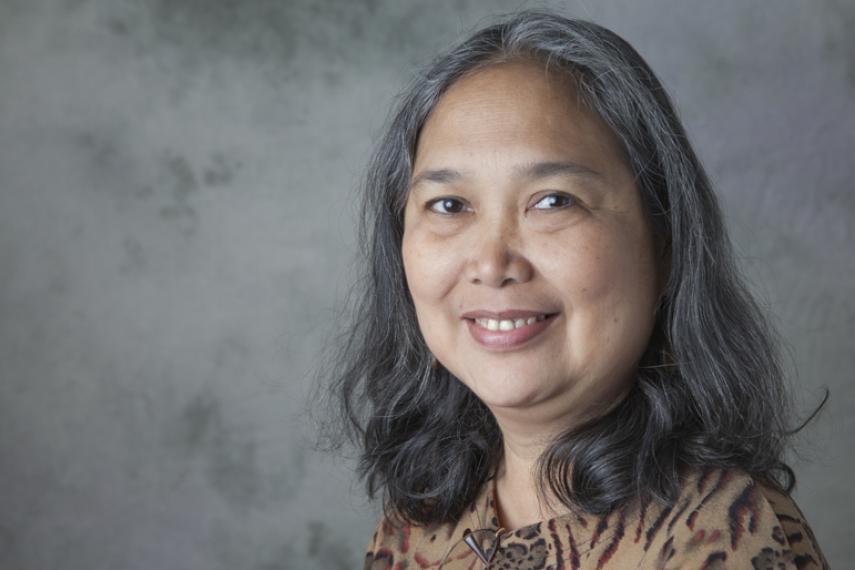 Junice Melgar traces her days as an activist in the Philippines to her time in high school under the cloud of the Marcos dictatorship. She remembers barbed wire around her school and the military rummaging through students’ personal effects. Later, as a medical student, she joined the national liberation struggle.

It was a difficult time, one of secrecy, fear and violence. Junice was involved in providing free medical services to rural communities, particularly women. Listening to them, she realized the depth of entrenched patriarchal attitudes and the suffering they caused countless women. It awakened the feminist in her.
Junice was also inspired by the agency of women in the communities in which she worked. The women did their own political analyses and proposed solutions. “My job,” says Junice, “was to ensure that these women could speak and act on their own behalf. And that is still what I and Likhaan do today.”

In the post-Marcos period, Junice and other health activists formed Likhaan, one of the country’s leading women’s health organizations. Through organizing and training women in slum areas as community health workers and advocates, Likhaan has created innovative and effective community-based women’s health programs. Inter Pares has supported these programs since their inception in 1995.

In collaboration with other organizations, Likhaan has successfully advocated for the passage of the Philippines Reproductive Health Bill, which is now law. It will reduce maternal deaths through the provision of quality health services for pregnant women, emergency obstetric care, family planning and contraception, and health education for youth. According to a collaborative study by Likhaan and the Guttmacher Institute, increasing access to contraception for all women at risk of unintended pregnancy in the Philippines would prevent an astounding 2,100 maternal deaths annually.

As part of their advocacy campaign, Likhaan and the communities with whom they work courageously raised their voices in support of the reproductive health law – on the streets, in the media, and in the Philippines Congress. Though progress related to implementation of the law has been slow, many believe the law is an important turning point in the fight for reproductive justice in the Philippines.

Inter Pares proudly supports the work of Junice, Likhaan and their community partners, inspired by their perseverance and courage.

‘My job,’ says Junice, ‘was to ensure that these women could speak and act on their own behalf. And that is still what I and Likhaan do today.’