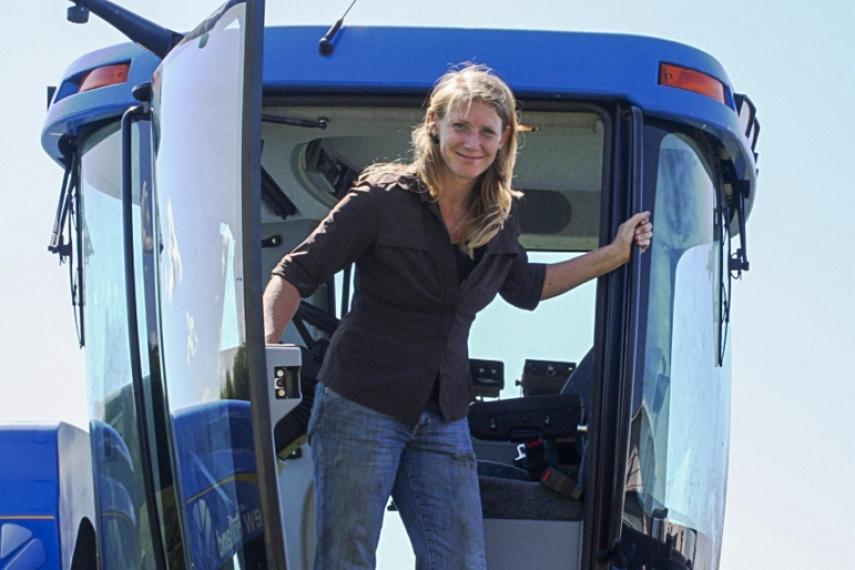 Kalissa Regier:: Enjoying a day of harvesting in the prairies.

As Kalissa admits, her story is different than that of the typical farm family. Growing up in rural Saskatchewan, she has seen many farms disappear and never dreamt of becoming a farmer herself.

Like many other farmers, Kalissa’s parents encouraged their children to keep their options open, get a university education and leave the farm. Kalissa’s older siblings all became engineers and she ended up in British Columbia, first studying horticulture, and later, jazz. It was on campus, and not on the farm, that Kalissa started to really think about food for the first time. As she puts it, “As commercial grain growers, we don’t eat what we grow. Farmers are often just as disconnected from their food as others.”

Kalissa began thinking about food in terms of the environment and social justice. One afternoon, as she was planting a small garden in her rented backyard, it hit her: she decided to go back home to farm – but not to any kind of farming. For the past ten years, her family’s farm was only breaking even and her parents’ side business kept them afloat. “I knew they were never going to sell the land because they are too attached to it. We have enough family history here. So my parents ran the farm just for the sake of keeping it going. They farmed in ways that took the least amount of time. This is why they began growing genetically modified crops – it’s a huge time saver – you just throw it in the ground and spray it.

When Kalissa came back home, her parents understood that she was serious about farming, but they also understood that she was not interested in farming their way. The environmental and health risks associated with this type of farming, along with the dependence on expensive seeds and chemicals, were important considerations. “My parents were supportive, and still open to learning and experimenting. We struck a partnership and over the course of six years, turned the farm around. It is now a certified organic farm that grows golden flax, red lentils, rye, oats, barley, spring wheat, and hempseed.” The soil that had been planted with genetically engineered crops recovered from the application of chemical fertilizers and pesticides, and today Kalissa’s family’s farm is ecological, producing healthy and nutritious food, and is profitable. Some neighbours started to take notice and have also begun the transition to organic agriculture.

Kalissa’s enthusiasm to share her story has taken her far beyond her own community. As the National Farmers Union (NFU) Youth Vice-President, she has travelled across the country, and even to Benin, Mali, and Mozambique, building solidarity with other young farmers who are actively changing the face of farming.

“When speaking to other young farmers it can get pretty depressing. The situation is the same for farmers around the world. We’ve lost family farms at a huge rate over the past forty years. And when we lose a family farm, it will never be a family farm again – it gets eaten up by huge corporate industrial farms. But with the NFU Youth, the outlook is different; they are very positive about farming.” Indeed, at a time when there is increased demand for ecological and local food, this new generation of farmers is breaking away from the bondage of financially and environmentally costly chemicals; they are growing food ecologically, and selling it locally.

For many years, Inter Pares has been a close collaborator of the NFU. The NFU has been a staunch defender of the family farm in Canada and has also been instrumental in building the international family farm and peasant movement La Via Campesina, which has become one of the most important movements for social justice in the world. With young people like Kalissa in NFU’s ranks, its future is more than promising.

The soil that had been planted with genetically engineered crops recovered from the application of chemical fertilizers and pesticides, and today Kalissa’s family’s farm is ecological, producing healthy and nutritious food, and is profitable.