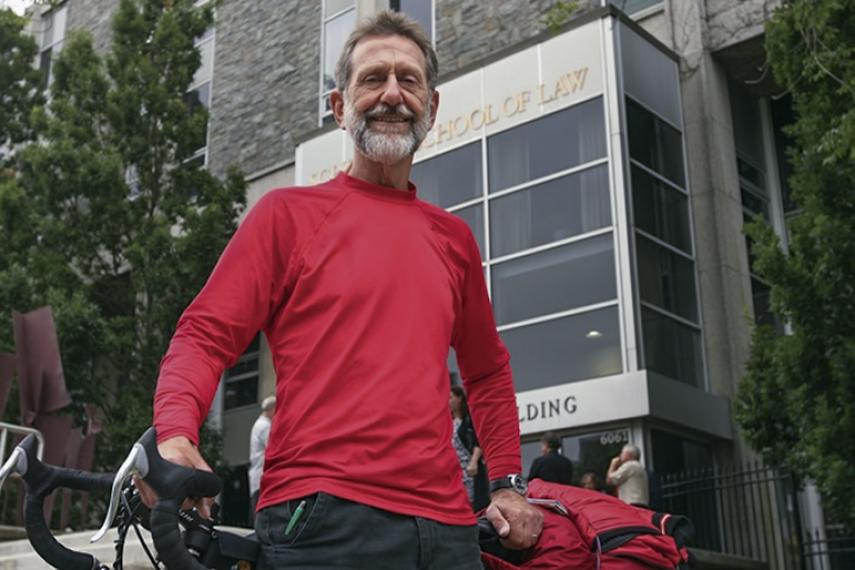 2011: Rod bicycled from his home in Vancouver to his 40-year law school reunion in Halifax to raise funds for Just Aid.

While living and working in Hong Kong in the early 1990s, Rod Germaine and his wife Adeline spent their holidays travelling in the region. They took a two-week holiday in Burma in 1990 and were struck by the disturbing contrasts: stunning physical beauty and warm, engaging people under the control of one of the world’s most corrupt and brutal military regimes. As Rod says, “Burma got a hold of me.”

Years later, when they returned to Vancouver, Rod felt that it was time to do something for Burma. He had recently taken up golf and decided to combine his two passions. He first turned to the Vancouver Burma Round Table for information about organizations providing health services to people from Burma and learned about the Mae Tao Clinic, the Back Pack Health Workers Team and Inter Pares. He then turned to his community and organized a golf tournament to raise funds for Burma. The annual Just Golf Tournament and Dinner raised over $23,000 on its first year.

Rod’s work has evolved from organizing golf tournaments to establishing the Just Aid Foundation. While the golf tournament is still their biggest fundraiser, the charitable foundation is expanding to include other events. The 2007 Saffron Revolution, in which thousands of monks, nuns and others protesting against the junta were violently suppressed, motivated a fresh group of activists in Canada. Rod met some of these people at events in Vancouver and many of them have now joined the Foundation’s board.

Through the tournament, Rod met Dr. Penny Ballem, former Deputy Health Minister of British Columbia and they immediately began planning for her to visit Burma’s border and meet the Mae Tao Clinic and Back Pack Health Worker Teams. In 2007, Inter Pares staff Rebecca Wolsak accompanied Penny for an exchange with these two health organizations. Penny is now the President of the Foundation.

In its ten years of activities, the Just Aid Foundation has contributed just over half a million dollars to Inter Pares’ health program on Burma’s borders. In addition to this significant financial contribution, Rod’s commitment to Burma has attracted many others to the cause, demonstrating how an individual’s passion can be contagious, expanding a movement for solidarity and justice.

In its ten years of activities, the Just Aid Foundation has contributed just over half a million dollars to Inter Pares’ health program on Burma’s borders.