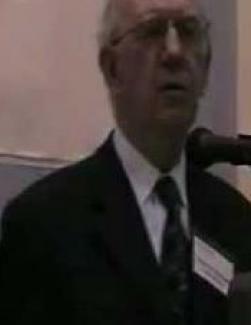 Warren Allmand, prominent international human rights consultant and member of the International Civil Liberties Monitoring Group (ICLMG), of which Inter Pares is a founding member, delivered the keynote address to Inter Pares' Annual General Meeting in April 2007. Under the theme of "Anti-Terrorism and Human Rights," Warren Allmand offered his reflections on the conclusions of the Arar Commission and criticized the current security establishment, which is increasingly threatening our rights and freedoms rather than protecting them.

Warren Allmand describes various so-called terrorist cases that illustrate the climate of paranoia and suspicion of security forces that has been fostered by the adoption of the Anti-Terrorism Act.

Warren Allmand discusses the importance of following up on the recommendations from the Maher Arar Commission, and the obligations for our governments to respect national and international rule of law.

Recalling recent events and his past experience as Canada's Solicitor General, Warren Allmand illustrates how Canadians' confidence in the country's security institutions has been shaken and need to be re-established.

Warning us of the need to remain vigilant to protect our rights and freedoms, Warren Allmand underlines that security and freedom are not contradictory.