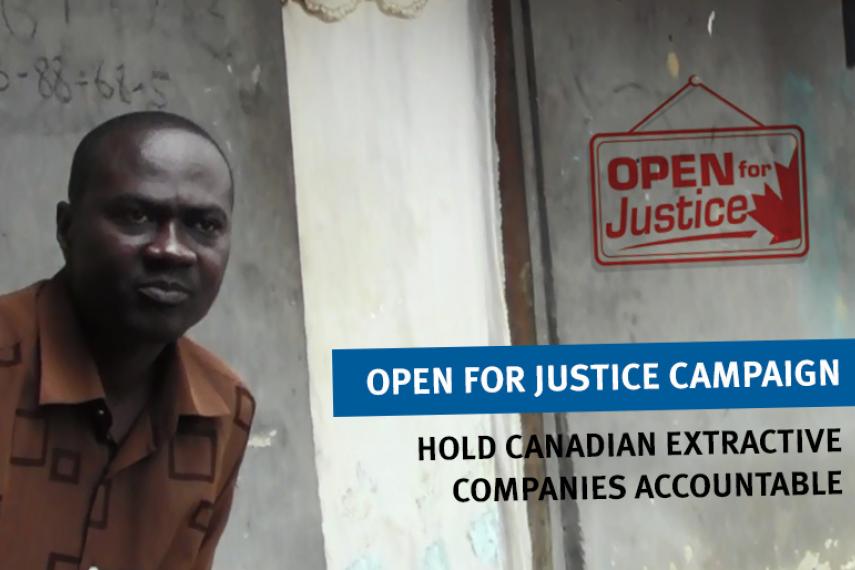 Canada dominates the global mining industry, with active projects in over 100 countries. The budgets of these companies are often bigger than the budgets of the countries in which they mine. Yet there are virtually no regulations in Canada to prevent unscrupulous companies from taking advantage of weak environmental and labour laws, lax oversight of health and safety regulations, or lack of protection for human rights and the rights of indigenous peoples.

If the approval of a mine meant you would be kicked off your land, would you expect a chance to say no this project?

And if it went ahead, would you expect to be compensated?

If your drinking water were poisoned or water sources dried up – would you expect someone to fix the problem?

If you and your neighbours publicly denounced wrong-doing by the company involved, should you be able to do that without being threatened or physically harmed?

People who have been harmed by Canadian mining operations overseas need to be able to seek justice in Canada.

Join us to call for:

This campaign is being carried out by a wide range of churches, unions, and human rights, environmental, and international solidarity organizations, who together are known as the Canadian Network on Corporate Accountability (CNCA). Read our backgrounder to learn more about this campaign.

Join our month of action (May 2017) for mining justice. You can take action in person and/or on social media.

We collaborated with a group of volunteers and professional videographer Steven Hunt of SDC Video Production to make this video a reality.

Chirano Mine, Sefwi region, Ghana
For nearly a decade, Ghanaian cocoa farmers from the Sefwi region have been struggling to obtain full compensation from a Vancouver-based mining company for the loss of their land and livelihoods. With no land to farm, no money to buy land, shortage of water and frequent floods in their community – scourges directly caused by the mine and its activities – the farmers are in desperate need of justice.

Read more about this case.

Indigenous Maya Mam communities living near Goldcorp's open pit Marlin mine in the northwestern highlands of Guatemala complained that their water supplies were drying up, that people have been getting sick and that their right to free, prior and informed consent over this development project on their lands had been continually disrespected. Nonetheless, the Canadian office, called the National Contact Point, responsible for administering the voluntary Guidelines for Multinational Enterprises as a member of the Organization for Economic Cooperation and Development (OECD) refused to investigate or determine whether or not the company was abiding by the guidelines. It also refused to be swayed by recommendations from prestigious human rights bodies such as the Inter American Commission on Human Rights which during the time of this complaint recommended that the Marlin mine should be suspended.

Carrying out such investigations and making determinations of fact are well within the mandate of this office, but the Canadian government chooses to go easy on Canadian mining companies instead of working to defend the wellbeing of those whose lives and livelihoods are being put in jeopardy from this project.

Read more on MiningWatch Canada's site about this case.

Follow up: Now another company, closely related to Goldcorp, is about to put into production a mine that is already deeply mired in conflict. See some background about Tahoe Resources' Escobal project in southern Guatemala and take action here.

Workers and landowners living across the road from Excellon's La Platosa mine in Durango, Mexico have been faced with the tremendous arrogance and disregard of a company that knows that it is operating in impunity.

Workers at this mine were the first to try to file a complaint with the Canadian Government's CSR Counsellor, Marketa Evans, principally over concerns related to their right to association and health and safety issues at the mine. Nonetheless, the complaint shut down when the company refused to dialogue.

It has been the same story ever since and ultimately what led landowners and workers to strike throughout the summer of 2012, only to have their protest shut down with violent repression while the company's operation manager looked on. It is also why landowners have decided to endure a lengthy legal process in a local agricultural tribunal to rescind their land use contract with the company. The built-to-fail mandate of this Canadian office is also at the root of why it hasn't managed to deal with any of the complaints brought before it so far.

Read more on MiningWatch Canada's site. There's also more background on the conflict, and you can read MiningWatch's background analysis of the Counsellor's office.