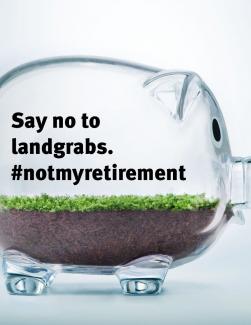 Quebec and BC’s pension funds have land investments in Brazil that are forcing peasants off their land through violence and fraud. The two funds are investors in a major US pension fund (TIIA-CREF), who has set up a fund called TCGA to buy up land around the world, including in Brazil. Inter Pares and other Canadian organizations have conducted research that that shows that some of this land has been acquired from a person accused of forcibly displacing local people,  even assassinating one farmer who refused to sell, and through falsifying documentation to claim ownership. The fund is also evading local laws were designed to prevent speculation that drives farmers off their land. Learn more here.

As part of the campaign "My Retirement, Not at the Price of Human Dignity!", Inter Pares is encouraging people to write to the CEOs of the pension funds to express their indignation. Both pension funds have made a commitment to invest in businesses that respect human rights as well as Canadian and international standards for environmental regulations. Hold these funds accountable.

If you email your letter, please cc our campaign: pensionlandgrab@hotmail.com