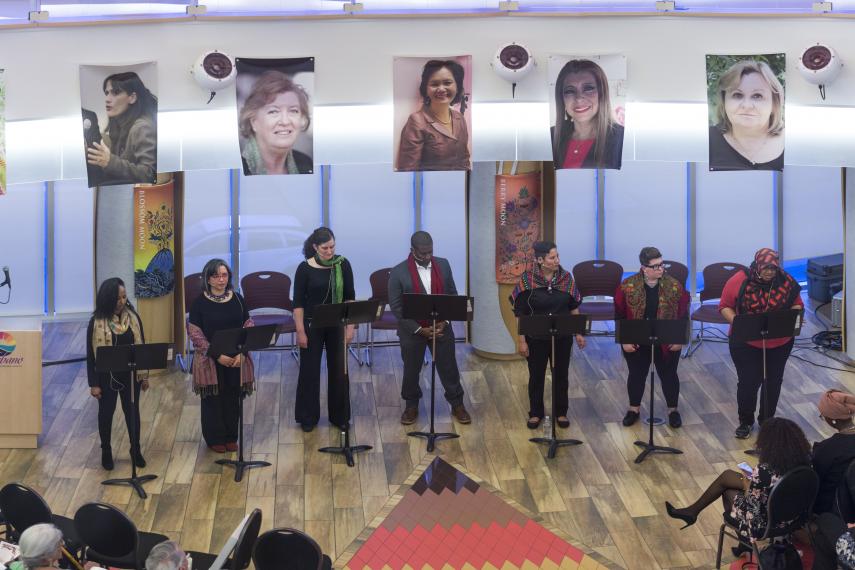 Raising awareness of other realities, learning from others’ experiences, deepening our solidarity ... this is what Inter Pares seeks to do through our public engagement.

Organizing conversations between Canadians and our international counterparts is one way we help Canadians to be in solidarity with struggles around the world, and to build horizontal relationships among individuals from diverse backgrounds. Whether it’s with donors, fellow activists, government officials, or curious members of the public, every conversation with our national and international counterparts helps to build bridges that contribute to globalizing equality.

That’s why this year, among other events, we worked with director Jessica Ruano to organize the Ottawa premiere of the documentary play Seven, which traces the lives of seven women who struggle against patriarchy in different parts of the world. Over 250 people attended the event and joined the discussion afterwards on human rights abuses facing women worldwide. The play’s glimpses into the seven characters’ lives were sometimes enraging, sometimes tragic, but represented universal struggles for women’s rights, and vividly illustrated women’s courage and tireless determination.

Later in the spring, we toured Ontario and Quebec with two staff members from the Likhaan Centre for Women's Health in the Philippines. In public meetings and events at libraries, public health centres, women’s legal centres, bakeries and more, the tour helped raise many people’s awareness about the realities that youth, women, and members of the LGBTQ community in the Philippines face, and gave all of us the chance to express our solidarity with one another. As well, our two guests were able to exchange with local organizations addressing similar issues, and to share their daily realities and challenges with officials at Global Affairs Canada.

All of these conversations were rich and intense, because they were based on shared commonalities of women’s experiences worldwide. As we know too well, around the world women continue to face violence, a lack of access to healthcare, and often precarious sexual autonomy and reproductive rights. However, though the challenges are widespread, so are the responses and resistance: grassroots organizing, support, and advocacy. Sharing stories inspires us to rethink our efforts and refocus our contribution to these long-term struggles.

We believe that we have a lot to learn from one another, and that is why Inter Pares connects people and expertise. It’s an honour to share stories of the global struggle for social justice, and to use them as bridges to connect us all.

Sharing stories inspires us to rethink our efforts and refocus our contribution to these long-term struggles.