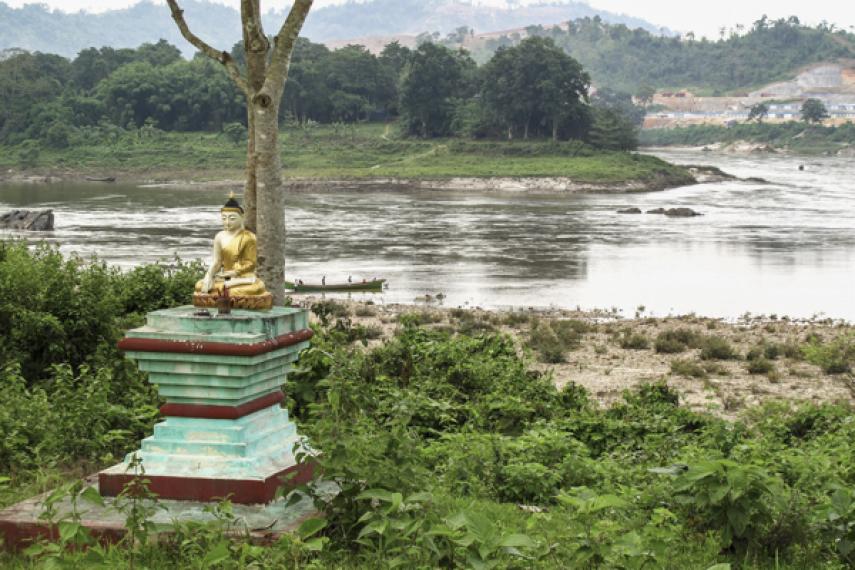 The Myitsone Dam: it would flood a locally sacred area that is about the size of Toronto, displace tens of thousands of people, and irreversibly damage one of the world’s most biodiverse areas.

Burma is located in a biodiversity hotspot, recognized globally for richness in flora and fauna, but much of it still controlled by the military and their crony companies. Most of the natural resources are in conflict-affected areas where coercive control is maintained, including burning down villages, surrounding development projects with landmines and conscripting villagers to build infrastructure. The unregulated exploitation of Burma’s resources has caused increased militarization and massive human rights violations, and has had devastating consequences for the environment.

Large dams are being constructed on all of Burma’s major rivers and tributaries. The electricity and revenues generated go entirely to the regime, their cronies and neighbouring corporations and governments. With no material benefit to local communities, dam construction in fact endangers millions of people living along the rivers. The confiscation or flooding of land and the diversion of rivers results in the loss of homes, food and livelihoods.

Since the early 1990s, Inter Pares has been providing support to community-based organizations documenting the impacts of development projects in Burma. In 2007, ten organizations representing dam-affected communities launched the Burma Rivers Network (BRN). BRN members believe that resource consumption and distribution must be based on principles of ecological sustainability and social justice. BRN monitors the status of dam projects that impact people living throughout Burma. Information on these projects is often secretive or distorted, and so raising awareness among local communities is a priority. BRN builds networks with similarly-affected communities in Asia and engages local governments, investors and dam construction corporations. BRN also seeks opportunities to build links with Chinese civil society, as China is both the largest investor in Burma and its closest diplomatic ally.

In 2010 the Shan Sapawa Environmental Organization, a member of BRN, together with the Shan Women’s Action Network, documented the unnatural water fluctuations in Burma caused by a dam built in China. Traders had lost up to one-third of their income after boats were stranded on sand banks or flooded by water surges. The findings received widespread international media attention, including in China.

Also in 2010, BRN teamed up with Burma’s renowned comedy troupe “Thee Nyee Nyaung” to produce a video series of skits and songs about the regime’s sale of energy and the impacts of dams. The production was broadcast nationally and thousands of videos were distributed, reaching 20 percent of Burma’s townships.

By documenting the impacts of existing dams and those under construction, BRN is able to engage in well-informed dialogue with villagers, local leaders, community-based organizations, national organizations and regional bodies in Burma. They are exposing the links between damming Burma’s rivers, enriching the regime and fuelling the conflict. They are also inspiring conversations about the management of resources in a future peaceful Burma.

Creating learning opportunities to link the damming of Burma’s rivers with fuelling the conflict – which inspires conversations about future resource management.