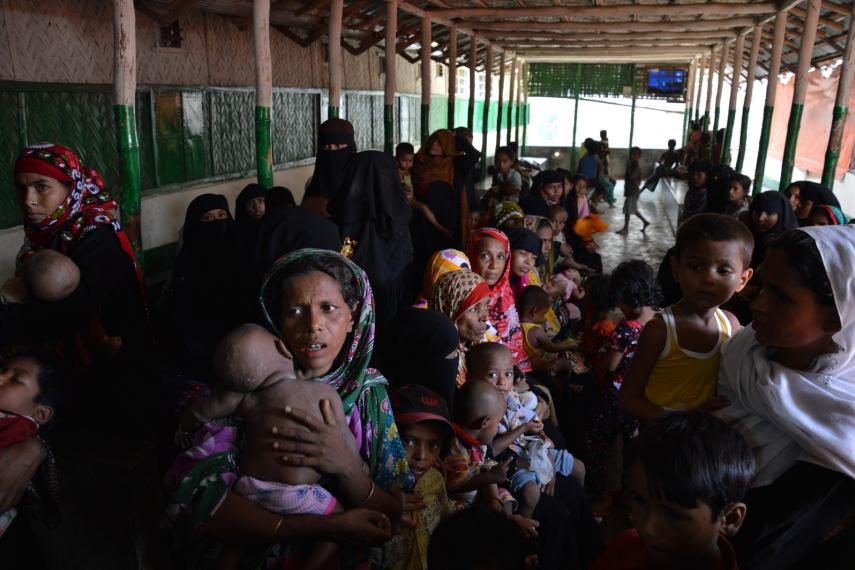 " I was with my 22-year-old sister-in-law in our house. We ran outside. People were running everywhere. My sister-in-law was shot in the stomach. There were many people killed – up to 100 killed, men and women. I saw small children being thrown into the burning houses. Our neighbour’s children, toddlers, were thrown into the fire. I was shot too at that time."

Since October 2016, Burma’s military has unleashed a new wave of violence against Muslim Rohingya civilians in the northwest. Burning villages, massacres, rape, and looting have driven at least 70,000 Rohingyas to flee to Bangladesh. Burma’s government, led by Nobel Laureate Aung San Suu Kyi, denies any military wrongdoing, and claims that Rohingyas are burning their own homes in the hope of getting new ones built by international relief agencies. This same government blocks access to Rohingyas by humanitarian agencies, journalists, and independent international investigators, and has refused to cooperate with a fact-finding mission appointed by the UN Human Rights Council.
For decades, Burma’s military has systematically stripped Rohingyas of their rights and stoked tensions between neighbouring Arakhanese Buddhists and Rohingya Muslims. Since 2012, repeated waves of violence have driven a conservatively estimated 168,000 Rohingyas from Burma, and forced over 140,000 into squalid concentration camps within the country. This violence has been characterized as crimes against humanity, ethnic cleansing, and even genocide.
The military and the state have gained popular support by characterizing Rohingyas as unwanted foreigners and a security threat. Powerful Buddhist monks have disseminated hate speech with very few impediments. The rhetoric of dehumanization on social media has been prolific.
The report Witness to Horror documents the voices of Rohingya women displaced by the latest violence. Published by Kaladan Press Network, an independent Rohingya news agency and long-time Inter Pares counterpart,
the women’s accounts are shattering.
Documenting lived experiences is a critical component to confronting this situation, as is building solidarity within Burma. In 2003, with support from Inter Pares, Kaladan and other ethnic news agencies formed Burma News International to encourage collaboration between journalists reporting on local news. Now including eleven media groups, it is Burma’s only coalition to include both Rohingya and Arakanese members.
Another Inter Pares counterpart, whose name is withheld for their security, works to bring Rohingya and Arakanese youth together for leadership courses that require collaboration. This builds understanding and empathy to counter dehumanization and hate. For the same reason, Inter Pares supported a trip by members of Burma’s civil society to meet with Rohingya refugees in Bangladesh.
For Inter Pares, it is also important that we share what we hear in Burma with Canadians to raise awareness and inform Canadian foreign policy. In 2016 we testified before the Subcommittee on International Human Rights, who subsequently published a report with strong recommendations for Canadian government action to promote Rohingya rights.
In mid-2017, we started supporting an initiative in Ontario. I Am Rohingya is a play created by Rohingya youth whose families resettled to Canada. One of its producers, Innerspeak Media, is creating a documentary to share the message with a broader audience. Bringing together human rights, refugee experiences, and international action, this project exemplifies the interconnections between us all. Throughout our Burma programming, we are seeking opportunities to build connections like these and focus on our shared humanity.
Our Burma program is undertaken with the financial support of the Government of Canada provided through Global Affairs Canada.