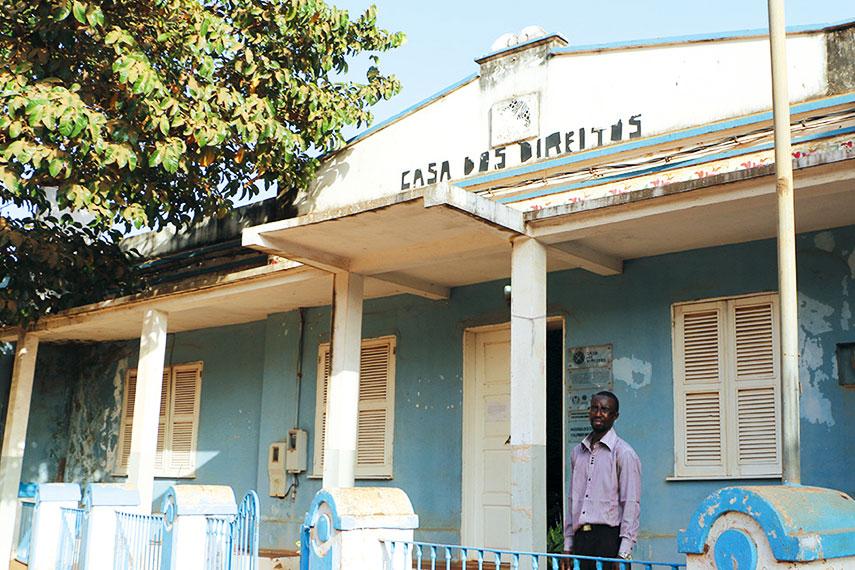 The Casa dos Direitos: It offers a space to raise awareness on human rights in Guinea-Bissau. Credit: Patricia Charest Mugwaneza

It was my first time in Guinea-Bissau. Before arriving, I knew that I would be blown away by the beauty of this small emerald green country on the shores of West Africa, and I looked forward to meeting Tiniguena, Inter Pares’ counterpart dedicated to protecting the country’s unique biodiversity.

What I hadn’t expected were the astonishing winds of change I witnessed. Something special was happening in the country. After the latest of multiple military coups and two years of democratic transition, the 2014 elections finally put into power a legitimate and democratically elected government – one that is serious about listening to its people and creating social change.

Everything seems possible again, and the team at Tiniguena is buoyed by this optimism. An illustration of this shift is the recent conversion of the oldest colonial jail, used during successive authoritarian regimes to imprison and torture dissidents, into the Casa dos Direitos(Rights House). The building is now home to the Human Rights Defense League, of which Tiniguena is an active member. Rights House offers a space for activists to write, publish, raise awareness, and campaign for human rights in Guinea-Bissau.

In late 2013, Tiniguena co-organized a forum on food sovereignty in which 120 organizations participated. Citizens, villagers, officials of the transitional government, and non-governmental organization representatives from all over Guinea-Bissau issued concrete recommendations to improve and defend the universal right to adequate food. Their voice was heard: as a result, the government formed a national committee, which includes Tiniguena, that now reviews land-related laws to foster nutritional self-sufficiency in Guinea-Bissau.

Organizations such as Tiniguena are seizing the political opportunity to create deep and lasting change for justice in Guinea-Bissau. But it didn’t happen from one day to the next. It is a testament to the courageous work and organizing that Tiniguena carried out in the darkness of the country’s repressive past. My trip came as a breath of fresh air, as we witness the stifling of dissent in many other places, at the price of social innovation and progress.

The 2014 elections finally put into power a legitimate and democratically elected government – one that is serious about listening to its people and creating social change.