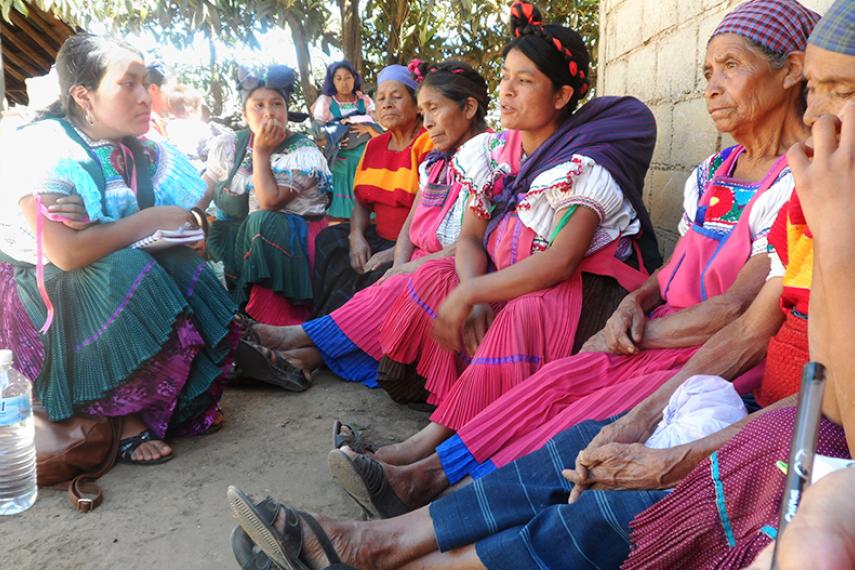 The sense of grandeur that one feels entering Mexico’s southernmost state is impressive. Leaving behind Guatemala’s winding roads, you begin to see the rolling hills of the Chiapas highlands on the horizon. Here, land ownership not only determines a family’s ability to grow their food and earn a living, but also secures their place in local political processes.

Following land reform at the beginning of the 20th century, the ejido, a communal land tenancy system, was enshrined into law. Though an important milestone for the rights of rural communities, its design is inherently discriminatory against indigenous women. Inter Pares counterpart the Centre for Women’s Rights of Chiapas (CDMCH) is fighting to overcome this gender inequality, while preserving the ejido’s communal system of land ownership.

Indigenous women in Chiapas often face “triple discrimination” because they are poor, indigenous and female. Inequality, discrimination and subordination create problems for them, even within their own communities. The exclusion of women from the ejido system limits their participation in community assemblies, where many major decisions that affect their lives are taken.

CDMCH’s research in these communities shows that only 18.5% of women own land. Women’s political participation is then controlled by their husbands or other male relatives. As more men leave Chiapas in search of work, the right to land has become increasingly important for indigenous women.

CDMCH is well aware of the scale of the task of challen- ging both land rights and gender equality. It means modifying historical patterns of legal discrimination that are reinforced through local customs. CDMCH has been providing ongoing accompaniment to twelve women’s collectives, building their capacity to defend, promote and exercise their rights.

Through this process, community outreach workers such as Catalina López Gómez (pictured above) accompany the collectives to lobby local, municipal and state authorities for the recognition of women’s right to land ownership as a fundamental human right. Because what’s the value of a land reform if it leaves behind half of the population?

Inter Pares is honoured to support CDMCH’s efforts in overcoming the inequalities faced by indigenous women in Chiapas.

Indigenous women in Chiapas often face “triple discrimination” because they are poor, indigenous, and female.