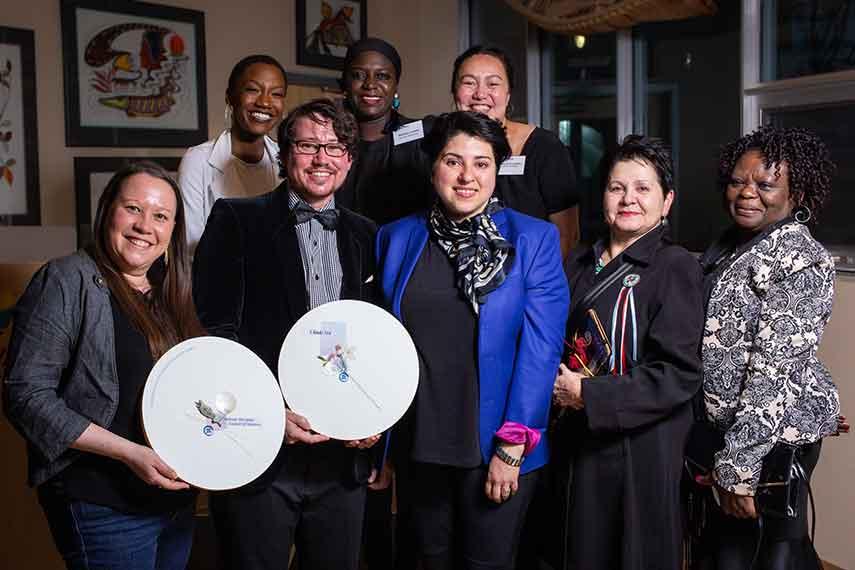 In April, Inter Pares recognized the amazing health work of Clinic 554 and the National Aboriginal Council of Midwives by presenting them with the Peter Gillespie Social Justice Award. The award honours the contributions of small and often unrecognized Canadian social justice organizations. Skilled in feminist, trauma-informed and anti-racist practice, Clinic 554 offers care in Fredericton, New Brunswick to underserved sectors of the population, including the LGBTQ community. The National Aboriginal Council of Midwives (NACM) exists to promote excellence in reproductive health care for Inuit, Métis and First Nations women.

In accepting the award, Dr. Adrian Edgar spoke passionately. “We are working alone to address the needs of many of New Brunswick’s most marginalized communities. As a result, we spend most of our time feeling isolated. Having our struggles witnessed … with a social justice award of this caliber is more uplifting than we can say.”

The Peter Gillespie Award goes beyond a prize and a ceremony. It provides a platform to speak out and raise issues. It instils pride and motivates people to continue doing what is difficult but what is right. As recipient of the Award, Clinic 554 also had the opportunity, facilitated by Inter Pares, to meet with the office of the Federal Minister of Health and voice concern about the lack of access to safe abortion in their province. Inter Pares collaborated with their campaign to improve access to safe abortion services in community-based clinics across New Brunswick and, during our Activist Fair in April 2019, provided them space to fundraise. In response, they said: “It is this recognition that fuels the fire when it is lowest.”*

We practice recognition in other ways, too. In a world where many funders change partners with every new project, counterparts tell us they value the long-term support of Inter Pares that allows them time to address the root causes of deeply entrenched problems. Our long-standing commitment is recognition of the importance of their work. They tell us that they value being seen as more than the “project” of Inter Pares – as being equals. We also facilitate opportunities for our counterparts to speak for themselves to Canadians. Last year we supported our Filipino counterpart, Likhaan, to meet with groups in British Columbia and share their outreach and education work with poor communities on sexual and reproductive health. The Canadian groups expressed their admiration for this work. For Likhaan, hearing this from their peers was recognition and affirmation of their efforts.

Often Inter Pares forgoes public recognition to better highlight the work of counterparts. This results, sometimes, in people not being so familiar with us, but instead knowing about the groups we support or the coalitions that we play important roles in. It is a conscious choice on our part, to better recognize the amazing groups we work with as equals in our joint struggles for social justice.

Our counterparts strive to make the world better, fairer, more just. At Inter Pares, we see our role as expressing solidarity with their struggles. Not to speak for them. Not to claim credit for what they do and accomplish.  We recognize, and we celebrate together.

*We are dismayed to note that just before this article was published, Clinic 554 announced their impending closure due to financial uncertainty. To learn more, please see the links below.

At Inter Pares, we see our role as expressing solidarity with their struggles.