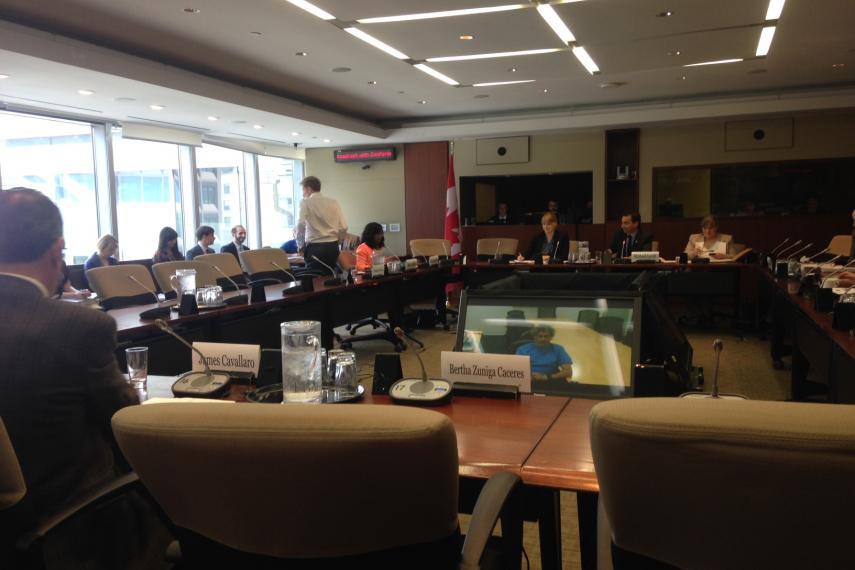 On June 2nd, Inter Pares staff Guillaume Charbonneau and Bill Fairbairn attended the parliamentary Subcommittee on International Human Rights, during its special session on the human rights situation in Honduras. Bertha Zúñiga Cáceres, the daughter of slain Indigenous activist Berta Cáceres, appeared before the committee by videoconferencing, along with Gustavo Castro Soto, the Mexican activist who witnessed Berta’s murder and who survived an assassination attempt.

Bertha spoke about the pattern of repression against Hondurans who voice their concerns for human rights and environmental impacts, particularly those traced back to the mining industry – a pattern that has intensified since the 2009 military coup, which Canada supported. Honduras has the highest number worldwide of human rights and environmental defenders who are murdered for their activism – at least 109 between 2010 and 2015.  She argued that the Canada-Honduras free trade agreement is illegitimate, because it was signed by the post-coup government that was not democratically elected, and that the new national mining act, which Canada helped to rewrite, legitimizes mining activity that is the root of the human rights situation. Gustavo outlined all the abuse of process in the investigation of his case, which underscored his concerns regarding the flawed justice system and systemic impunity in Honduras.

Following the meeting, Guillaume and Bill had the chance to speak to James Cavallaro, President of the Inter-American Commission on Human Rights (IACHR), who was also a witness at the testimony. They shared our concerns regarding the funding crisis at his institution, which provides a crucial space for pursuing justice in Latin America, and that we are urging the Canadian government to provide financial support, Canada not having pledged any amount yet for 2016.

The following week, the conversation continued with a meeting between members of the Americas Policy Group (APG) and the Canadian Ambassador to Honduras, Michael Gort. There, Guillaume raised issues from Bertha and Gustavo’s parliamentary testimonies, along with similar troublesome observations drawn from his monitoring of Honduras and Inter Pares’ work there with Project Counselling Service. The meeting was an opportunity for APG members to hear from the Ambassador about the Canadian response to Berta’s murder, to press him to take specific steps to promote justice and accountability for this and similar crimes, and to underline our ongoing concerns about Canadian resource exploration in Honduras and widespread community opposition to these projects.

Canadians continue to be outraged about Berta’s murder, and concerned that justice will not prevail. Concerned individuals in Ottawa and in Montreal participated in a rally on June 15th. A letter to the Ambassador of Honduras in Canada, Sofía Cerrato, was read during the rally and pictures were taken. At the same time, people all around the world gathered to demand justice for Berta and her murdered colleague Nelson García; justice and safety for their organization, COPINH, which continues to defend Indigenous territory from large-scale hydroelectric and mining projects; and justice for the Honduran people who have been living in a climate of violence, corruption and impunity since the 2009 military-backed coup. The worldwide day of mobilizing was also online at ‪#‎AccionGlobal15Junio and #JusticiaParaBerta.

An e-petition is now online and needs a minimum of 500 signatures to oblige the Canadian government to respond. Sign now!