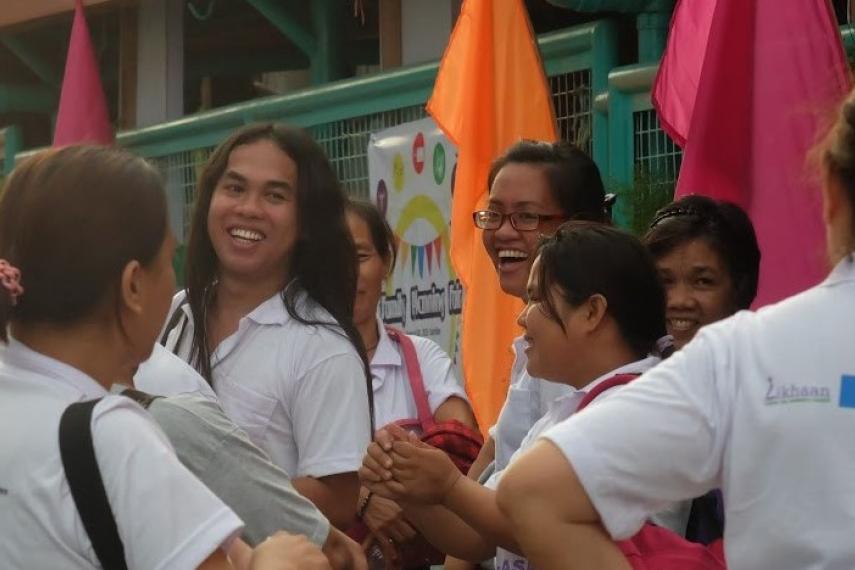 Staff and volunteers from the Likhaan Center for Women’s Health wear purple shirts because they want to be noticed in the slum neighbourhoods of Metro Manila where they work. The bright colour is recognized by many community members. But some of the staff and volunteers are even more noticeable because of how they express their gender identity.

Mark and Vere are Likhaan Community Mobilizers, and spend much of each day in neighbourhoods talking to people about contraception and reproductive health. They both identify as transgender. As Mark put it, “I would lie if I said I never faced any problems because of the way I look, but once I explain why I am there, people respect me for my knowledge and they want to learn.” They focus on reaching out to young people, finding ways to inform them about sexual and reproductive health, and in the process they are spreading a message of openness and acceptance.

Lene Ojeda is in her thirties and is an experienced Community Mobilizer. She came out as a lesbian when she was 17 and has been with her partner, a Likhaan Community Health Promoter, for the past ten years. Her parents have come to accept her: “They are fine now, but they want me to have babies and I don’t want to,” she laughs. Lene feels proud that she can help others as part of her work because, as she explains, “some women are lesbians but they are still married to men because there is no other way for them.” Lene’s presence in the community quietly offers such women an alternative model.

Since its founding over 25 years ago, Likhaan has welcomed all people, no matter how they identify themselves. They believe that everyone has a right to sexual and reproductive health services, regardless of sexual orientation or gender identity. For a few years, Likhaan offered an alternative prom so that LGBTQ2 students could have a safe space to celebrate. Strained resources led to an end of that popular event. Likhaan strives to address issues relating to the LGTBQ2 community – no easy challenge, given both limited financial resources and a conservative religious climate that promotes homophobia and transphobia. As Executive Director Dr. Junice Melgar states, “Our LGBTQ2 staff and volunteers are helping to break down stereotypes and to build solidarity and awareness, both among ourselves and in the communities we serve, by challenging restrictive ideas about gender and sexuality – through their work and through living their identities openly.”

Each year, Likhaan staff and volunteers are present in their purple shirts at Manila’s Pride March, which is growing despite challenges presented by the country’s conservative Catholic Church. Attitudes are shifting, and the purple shirts and the people that wear them are helping to bring about that change.