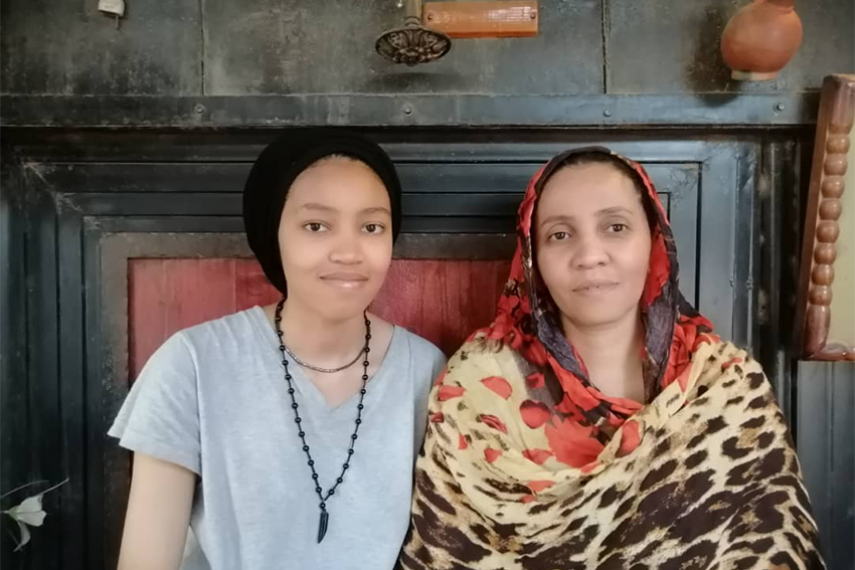 Join us in celebrating mothers like Misson, who joined her daughter on the frontlines of Sudan’s historic uprising.

When the uprising began in late 2018, Misson had little faith in protestors’ ability to end the brutal autocratic regime that she had endured for over three decades. It was not until her eldest daughter, Jood, became directly involved in the revolution that Misson began to see things differently.

Jood was participating sit-ins: actions that were the backbone of the revolution. People from all walks of life came together to occupy public space, sometimes erecting tents and coordinating teaching sessions. Many homeless youth joined the sit-ins and Jood started volunteering to teach and feed them.

Misson feared for her daughter’s safety, as these occupations were increasingly met with violent backlash. Summoning all her courage, she asked to accompany Jood to protect her. In response, Jood proposed that Misson help her distribute food and water to fellow activists, saying “If you want, you can sit there and wait for three hours until I am finished. Or, you can join me.” Seeing her daughter’s passion for the revolution and her confidence that they would succeed made Misson believe that change was possible.

As a feminist, Misson has striven to nurture her children’s agency. She treats her children as equals and says that when they disagree, “I try to put myself in their shoes and discuss.” For Misson, Jood’s activism is cause for celebration: “I am very happy with the person she has become.”

Now, Sudan is in the midst of what civil society hopes will be a peaceful transition to democracy. Organizations like Inter Pares counterparts SWRC and Sudanese Organization for Research and Development play a crucial role in fostering women’s political participation in the process.

Misson does not yet know if the new government will fulfill her expectations for true justice and equality, but she has faith in the determination of her daughter’s generation, who are still working hard to hold the new government accountable. Sudanese youth have started the hashtag حنبنيهو#, which translates to “we will build it.” It is a message of confidence, of victory: a promise that they will build the country they want, that they will have the home of which they dream.

This Mother’s Day, honour someone for the change they’ve made in your life. Give a gift that supports Misson and mothers around the world working for positive change for their families, communities, and societies.