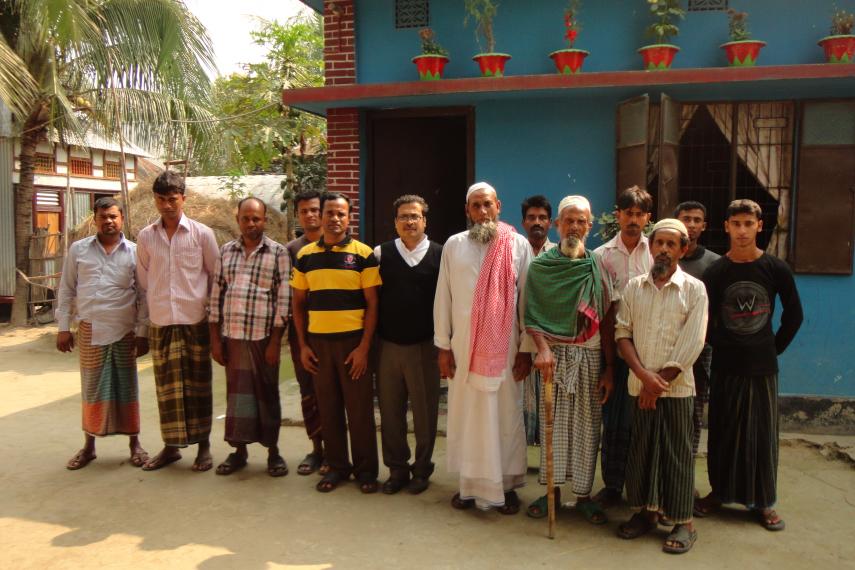 Mdenayet Ullah is a leader in the small community of Kandergaon, on the outskirts of the Bangladesh capital, Dhaka. He is the Imam of the local mosque and founded the local primary school. The village of Kandergaon is relatively prosperous, certainly not wealthy, but the land along the edge of the Meghna River is fertile and farmers get three harvests a year. The 400 families who own small farms around the village had a good life. All of that changed in 2009, when people came running to Mdenayet saying that there were barges pumping sand from the river bottom onto their fields and burying their farms.

The villagers protested. This was their land and they had not sold it to anyone. But they were told that the land now belonged to a company which intended to build a high-priced housing development. When people continued protesting, “musclemen” showed up and began to beat the villagers. Local politicians were bribed by the company not to support the villagers. The rule of law seemed to have disappeared and the villagers began to feel desperate. They had already lost 71 acres and the company was planning to fill in a total of 800.

Mdenayet had seen enough and took the lead in forming a resistance committee to organize people in defense of their land. The committee contacted Inter Pares’ counterpart the Bangladesh Environmental Lawyers Association (BELA). Iqbal Kabir, one of the founding lawyers of BELA, agreed to take on the case despite the danger associated with it.

The threat became clear in 2011 when Mdenayet was arrested on trumped
up charges and very badly beaten. Powerful interests have also sought to influence Iqbal. He has been offered massive bribes to drop other legal cases. His home has been broken into and sensitive case files stolen. But Iqbal and the lawyers of BELA believe in the rule of law, and in making it work to protect communities’ rights.

Iqbal met regularly with the villagers and built their case while strengthening the committee’s capacity. In 2012, the Ministry of the Environment ordered the company to stop the pumping and remove the sand from farmers’ fields. Though pumping stopped, the company refused to restore the farmland. Instead they built a guard house on it to protect their “investment”.

BELA took the case to court and in March 2014 it ruled in favour of the community and ordered the company to restore the land. It is a great victory, but since the justice system moves slowly, Iqbal expects another three years of legal battles. Still, he is confident that the community will ultimately win.

Unscrupulous powerful people and corporations can get away with this type of injustice in Bangladesh but organized communities with support from groups like BELA can use legal mechanisms to push back. Good governance and justice do not come from the top down. They come from the bottom up when citizens know their rights and demand that they be respected.

Improving the lives of the poor in Bangladesh by mobilizing people to claim their rights to land, education and healthcare.