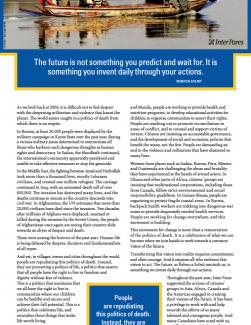 As we look back at 2006, it is difficult not to feel despair with the deepening militarism and violence that haunt the planet. The world seems caught in a politics of death from which there is no respite.

In Burma, at least 20,000 people were displaced by the military campaign in Karen State over the past year, fleeing a vicious military junta determined to exterminate all those who harbour such dangerous thoughts as human rights and democracy. In Sudan, the bloodbath continued, the international community apparently paralyzed and unable to take effective measures to stop the genocide.

In the Middle East, the fighting between Israel and Hezbollah took more than a thousand lives, mostly Lebanese civilians, and created one million refugees. The carnage continued in Iraq, with an estimated death toll of over 650,000. The invasion has destroyed many lives, and the deaths continue to mount as the country descends into civil war. In Afghanistan, the UN estimates that more than 20,000 civilians have died since the invasion. Two decades after millions of Afghans were displaced, maimed or killed during the invasion by the Soviet Union, the people of Afghanistan once again are seeing their country slide towards an abyss of despair and death.

These were among the horrors of the past year. Human life is being debased by despots, dictators and fundamentalists of all types.

Inter Pares is privileged to work with people around the world who have committed themselves to nurturing this politics of life. In refugee camps in Thailand, in conflict zones in Colombia, in the slums of major cities like Managua and Manila, people are working to provide health and nutrition programs, to develop educational activities for children, to organize communities to assert their rights. People are reaching out to promote reconciliation in areas of conflict, and to counsel and support victims of torture. Citizens are insisting on accountable governance, and the development of social and economic policies that benefit the many, not the few. People are demanding an end to the violence and militarism that have shattered so many lives.

Women from places such as Sudan, Burma, Peru, Mexico and Guatemala are challenging the abuse and brutality they have experienced at the hands of armed actors. In Ghana and other parts of Africa, citizens' groups are insisting that multinational corporations, including those from Canada, follow strict environmental and social responsibility guidelines. In Guinea-Bissau, people are organizing to protect fragile coastal areas. In Burma, backpack health workers are trekking into dangerous war zones to provide desperately needed health services. People are working for change everywhere, and this movement is building.

This movement for change is more than a renunciation of the politics of death. It is a celebration of what we can become when we join hands to work towards a common vision of the future.

Transforming this vision into reality requires commitment, and often courage. And it requires all who embrace this vision to act. The future, as Rebecca Solnit reminds us, is something we invent daily through our actions.

Throughout the past year, Inter Pares supported the actions of citizens' groups in Asia, Africa, Canada and the Americas engaged in creating their visions of the future. It has been a privilege to work with and help nourish the efforts of so many talented and courageous people. And many Canadians have acted with us, contributing to sustaining and celebrating life in its fullness. For your support we are very grateful.

This Annual Report provides some examples of the actions during the past year that nurture and reinvent the politics of life, today and into the future.