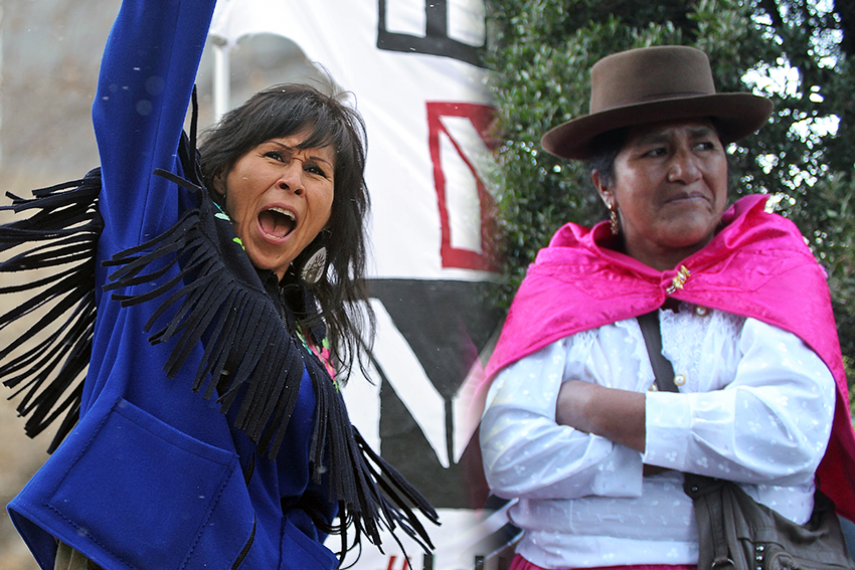 As featured in our 2019 Annual Report Mobilizing for Change

They came from different worlds:  a Quechua-speaking Indigenous farmer and community leader from the Peruvian Andes, and a Dene actress and author from northern Saskatchewan. But when Victoria Saccsara heard the story of Morningstar Mercredi during a human rights forum in November 2019, she felt an immediate, visceral connection.

Victoria Saccsara is a survivor of forced sterilization, a practice carried out through a deliberate policy implemented by Peru’s Fujimori government in the 1990s. Under the pretext of eradicating poverty, up to 300,000 women – the majority rural Indigenous women – were subjected to involuntary tubal ligation.

A survivor of sexual abuse, Morningstar Mercredi became pregnant at the age of 13. She sought help in a hospital in Saskatoon. Instead, without her consent or knowledge, the physicians removed one ovary and fallopian tube. Forced sterilization of Indigenous women in Canada has been documented from the 1800s to the present, and is currently the focus of a class action lawsuit.

Victoria and Morningstar’s lived experiences were central to the 2019 forum which took place in Quito, Ecuador alongside meetings of the Inter-American Human Rights Commission and Court. For Inter Pares and our Peruvian counterparts, SISAY and DEMUS, it was critical that survivors be heard and acknowledged. To that end, we facilitated the participation of Victoria Saccsara and two other Peruvian survivors. For its part, Semaganis Worme Lombard, the Indigenous firm spearheading the lawsuit in Canada, brought forward the stories of Morningstar Mercredi and other Indigenous women, revealing the extent of this phenomenon in Canada.

As the stories gradually emerge – not only from Peru and Canada, but from many other parts of the world – Inter Pares will continue to make connections, raise awareness, and demand concerted action to address this crime against humanity.

It gives me strength to know that we are not alone. We must join our efforts to denounce what happened and demand justice so that this never happens again! Victoria Saccsara President, Sumaq Huayta Association of Women Affected by Forced Sterilizations