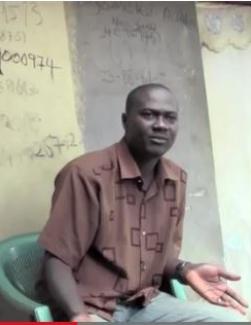 The Chirano mine is located in the south western region of Ghana, a coastal sub-Saharan country whose soil is rich in minerals and hydrocarbons. In 2004, Red Back Mining (now owned by Vancouver-based Kinross Gold) was granted a lease to build a mine in the Sefwi-Bibiani Gold Belt. Building the open pit mine involved displacing whole communities and destroying over 1,000 farms to make way for the mine.

For nine years now, Ghanaian farmers have been fighting to obtain full compensation for the loss of their land and livelihoods. Inter Pares and Third World Network-Africa (TWN-A), our counterpart in the region, have been supporting these farmers and their community in this struggle. Watch the following videos to learn more about their story.

In 2003, company representatives offered local farmers, who depend on their cocoa trees to make a living, compensation of 2.50 Cedis (at that time, $1.20 Canadian) per cocoa tree. The company declared this to be a generous offer, saying that the legal compensation was only 2.30 Cedis - and they cautioned farmers not to tell anyone as it was above the legal rate. Thinking that this was the best they could get, the majority of the farmers accepted the deal, but some of them investigated further and discovered that the legal minimum was really 5.22 Cedis, over twice what they had been offered. Twenty-five cocoa farmers refused the offer, and received nothing - but their farms were still destroyed. Since then, they have all been struggling for fair compensation. One of them is Dominic Cudjoe, a farmer who no longer has land to farm, and not enough money to buy a new one.

The mine makes it impossible for the community to access the natural sources of water that used to surround them. The company dug boreholes - wells with mechanical underground pumps - to compensate for this, but many of them are now broken. The villagers have neither the skills nor the money to fix them. Nicholas Ennin, another of the landless farmers, tells us that between the outside workers brought in by the mine, and the many broken boreholes, pressure on the water supply is heavier than ever. As a result, women and girls, who are traditionally responsible for water collection, now have to wake up at 2 o'clock in the morning to get clean water.

The company moved other dislocated families into town on the other side of a marshy stream. To provide access for those families to the main road, a connecting road and culvert was built over the stream. However, the culvert was undersized and has been crushed by the weight of vehicles. Despite villagers' efforts to clean out the culvert, floods are now common in th e village, and water flowing into some of the houses during the rainy season causes unhealthy and stressful living conditions for the community. Nana Gyankye offers to take us to see it for ourselves.

Unfortunately, as with most other mining-affected communities, employment didn't come along with the mine development. Modern mines require very little labour, and the workers who were hired were by-and-large not from within the community. Parents are now worried about their youth with no jobs, no prospects, and no land.

Sefwi villagers organized themselves to demand fair compensation. Inter Pares and TWN-A provided support for their early organizing efforts, and TWN-A facilitated meetings with various government ministries in an attempt to resolve the matter through the Ghanaian legal system. But despite early promise, the legal system has also failed these farmers. Even though the company defied the order of the then-Minister of Mines and Energy to pay in 2012, the Minister did not compel the company to pay. Instead, he merely asked the company and the farmers to settle the matter by the end of the year. Two years later and despite multiple promises, the farmers tell us that Kinross has not yet provided full compensation.

Kinross earned over $200 million in profit from the Chirano mine in 2011 alone, while maintaining in its 2011 Corporate Social Responsibility Report that the lower rate paid to the farmers was legitimate. Meanwhile, after almost a decade of struggle, over a thousand farm families are poorer because of the mine, and 25 farmers have no land at all.

For the farmers featured in this video essay, IT'S TIME FOR CANADA TO BE OPEN FOR JUSTICE.

Those who have been harmed by Canadian mining operations overseas need to have legislated access to Canadian courts, and Canada needs to establish an Extractive Sector Ombudsman mandated to investigate accusations of abuses and make recommendations to the government and the companies involved.

Join Inter Pares in supporting the call by the Canadian Network on Corporate Accountability (CNCA) for Canada to be Open for Justice - so that Nicholas, Dominic, Nana, and people in similar situations around the world, can once again have land to work as farmers, building a future for themselves and their children.

ACT NOW! Canada should be Open for Justice!