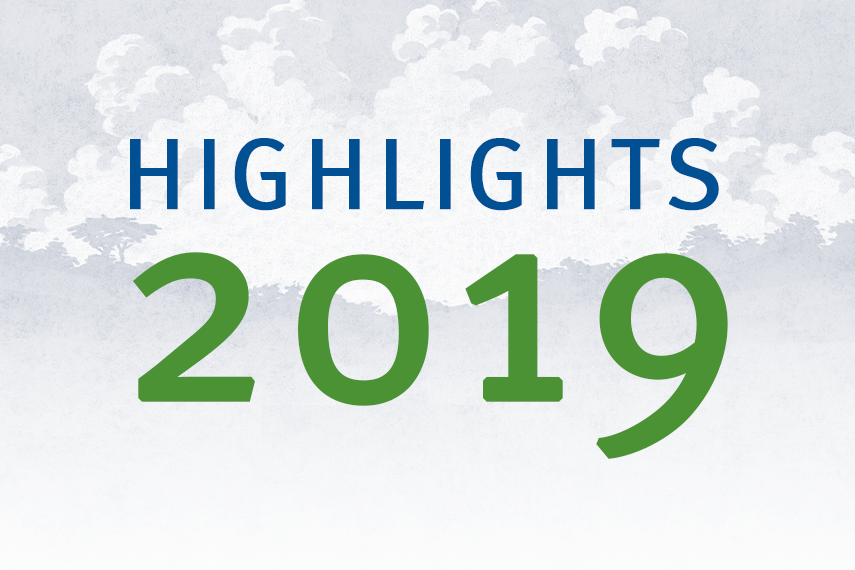 2019 has been a year of shared struggle, of solidarity, to globalize equality. There have been many moments throughout the year that have given us pause – moments that remind us we are in the struggle for social justice, together. Below we share some of these moments with you and invite you to contribute your own. Share with us in the comments below: what are your most memorable moments from 2019?

We kicked off 2019 by welcoming 284 new donors to the Inter Pares community! What a way to start the year. Your generous spirit, and all your many acts of kindness, brought us hope throughout the year. Months later, we’re faced with even more generosity. Throughout this December, two of our supporters, Jason and Cheryl, will donate $1,000 for every new Sustaining Donor to Inter Pares. Would you become one of these new monthly donors to unlock an additional $1,000 donation? 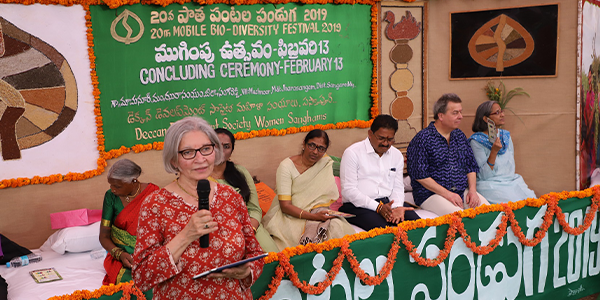 In February, Inter Pares board member Shree Mulay traveled to Telangana, India to attend the 20th anniversary of the Mobile Biodiversity Festival. The Festival is coordinated by long-term counterpart Deccan Development Society and highlights the importance of agroecology and biodiversity in farming. In attending the Festival, Shree reflected on the shared history of DDS and Inter Pares, and the vital contribution of women farmers and their local organizations in developing sustainable and citizen-controlled food systems – for the well-being of their communities and land. Read Shree's full remarks, here.

Ten years ago, the Supreme Court of Bangladesh issued a ruling instructing the government to form anti-sexual harassment committees in all public schools to address high rates of girls being harassed. The ruling was never implemented. In 2019, village-based landless groups supported by Inter Pares counterpart Nijera Kori used the ruling to put pressure on public schools in their communities to form these committees. 20 anti-sexual harassment committees were formed this year as a direct result of mobilization and advocacy of the women and men in the landless groups. 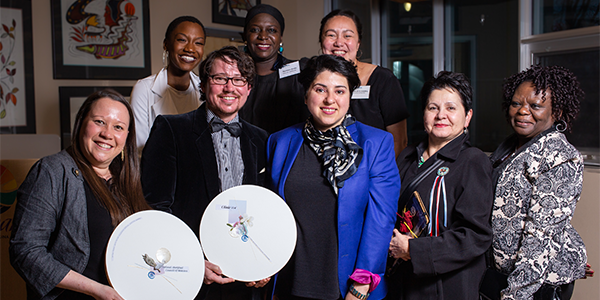 In April, Inter Pares recognized two outstanding organizations with the 2019 Peter Gillespie Social Justice Award, Clinic 554 and the National Aboriginal Council of Midwives, at our Activist Fair: Conversations on Sexual and Reproductive Health and Rights. It was the first time ever the selection committee had chosen two organizations to receive the award: one which is the only out-of-hospital access for abortion services and sole LGBTQ clinic in New Brunswick; and the other which is working towards the sustainable return of birth to Indigenous communities. It was an honour to recognize their important work, surrounded by allies, supporters and friends. What a beautiful evening! 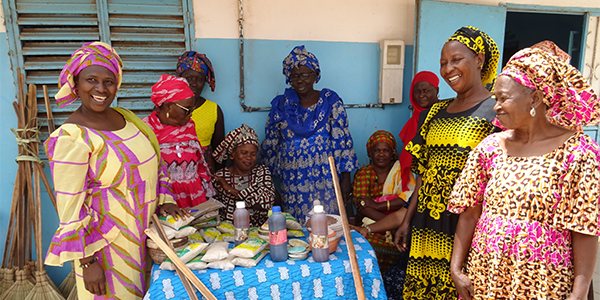 Responding to years of advocacy and organizing, the Senegalese government announced an “agroecological transition” as a pillar of its Plan Sénégal Émergent-Vert. To ensure the plan responds to needs on the ground and is guided by the experience and knowledge of communities, Inter Pares counterpart ENDA Pronat initiated a country-wide study to map out the various organizations active in agroecology in Senegal. In May 2019, the results of the study were shared and a national network of groups to accompany and support the agroecological transition process was born: Dynamique sur la transition agroécologique au Sénégal (DYTAES).

In 2019, Mae Tao Clinic celebrated its 30th anniversary of providing healthcare, education, protection, and so much more for people from Burma. From its humble beginnings in a simple wooden house near the Thai-Burma border, the MTC is now a well-established teaching hospital with nearly 100,000 patient consultations in 2018. Inter Pares has had the privilege of working with Mae Tao Clinic since the early 1990s. We have learned so much from staff at the clinic and look forward to many more years of collaboration!

In June, at the Women Deliver conference in Vancouver, the Government of Canada announced an unprecedented commitment that will reach $1.4 billion dollars, annually, to promote the health and rights of women and girls around the world over a ten-year period. Within this initiative, $700 million will be directed towards sexual and reproductive health and rights (SRHR). As an active member of the Future Planning Initiative, a coalition which has worked to strengthen Canada’s leadership on SRHR, Inter Pares sees this announcement as a true reflection of the power of collective advocacy. Learn more about this new commitment, here. 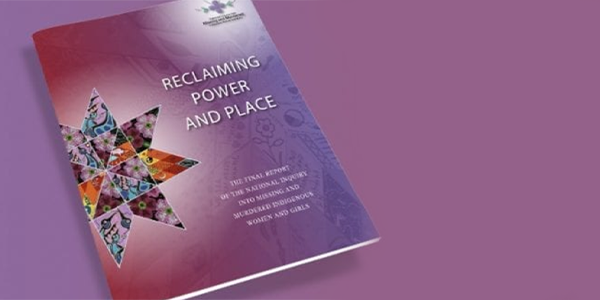 The National Inquiry into Missing and Murdered Indigenous Women and Girls launched its Final Report. Within the report were the Inquiry's findings and recommendations to give life to justice. The report highlighted the important role we all play in combating violence against Indigenous women, girls and gender diverse peoples. Read the final report here. Inter Pares staff and board have spent part of 2019 working in collaboration with Viola Thomas (Viola is from the Tk’emlúps te Secwe̓pemc people of the BC interior) to create an Action Plan for Working In Solidarity With Indigenous Peoples in Canada. We will be sharing this document publicly in the coming months. As our Action Plan states, Inter Pares’ goals are to: nurture programmatic links with Indigenous movements and activism, particularly feminist Indigenous struggles; support Indigenous resistance and resurgence in Canada; and encourage Inter Pares’ supporters and the public to get involved in the movement for Indigenous rights and decolonization in Canada.

In July, we were pleased to release The Purple Wave: Health on the Margins, a series of five short videos that spotlights alternative, community-based health programs and advocacy in Manila, the Philippines. In each of the videos, watch as Likhaan health promoters, community organizers, and medical staff address reproductive health issues in marginalized communities by providing services and educating women and girls. The videos also highlight how community organizing and advocacy can serve as a powerful tool to bring about positive and sustainable change. Watch the videos, here. 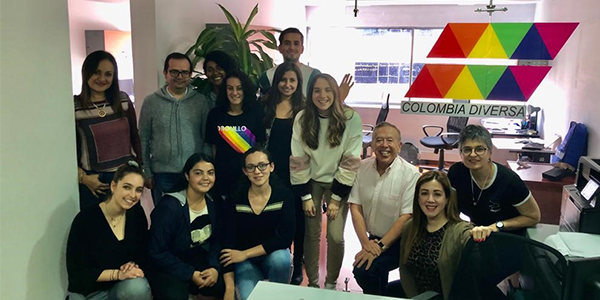 In August, Inter Pares secured funding from Global Affairs Canada for a two-year project to enhance the meaningful participation of Colombian LGBTI people in peacebuilding efforts. The first of its kind to recognize LGBTI rights, the Colombian Peace Agreement offers a historic opportunity to forge a more inclusive and democratic society. The project aims to seize this opportunity and contribute to the long-term goal of ensuring full and equal access to rights by LGBTI persons and communities across the country.  Among the many victims of Colombia’s armed conflict, LGBTI persons were often specifically targeted by armed groups because of their sexual orientations or gender identities. 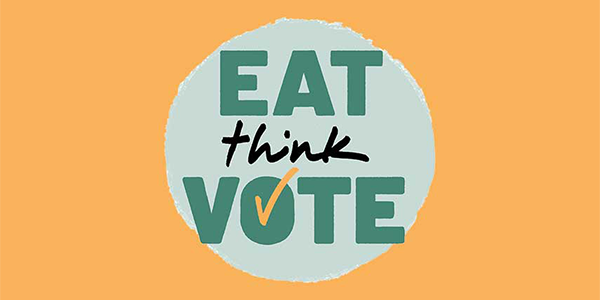 During the 2019 federal election campaign, Inter Pares supported Food Secure Canada’s Eat, Think, Vote campaign involving 117 community groups who organized 50 events across nearly all the provinces and territories. 7,437 people came to grill candidates from every party on issues that matter to them: the impact of pesticides on our environment and health, food deserts in our cities, hunger in our classrooms, and the growing demand for locally and ecologically produced foods. Food was an election issue, and momentum continues to build for Canada to transition to a more sustainable and just food system, and to establish a long-overdue universal school food program.

In October, Inter Pares counterpart La Colectiva Feminista and community radio station Radio Güija sent an important message of solidarity to Clinic 554 in Fredericton, New Brunswick. Angélica Rivas, Coordinator with La Colectiva Feminista, said: “We are fighting for women’s right to have control over their body. If women don’t have access to health services, that right cannot be fulfilled. That is why we stand in solidarity with women in Eastern Canada.” The message came shortly after Clinic 554, the sole abortion provider in New Brunswick’s capital, announced its impending closure. Since then, there has been an incredible swell of public support around the Clinic and the struggle continues to keep the clinic open. 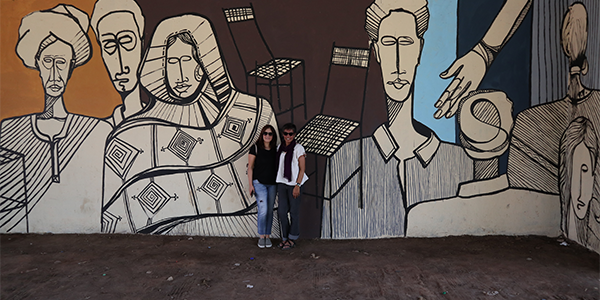 A year ago, Inter Pares counterparts were among the millions of people who embarked on a momentous uprising that changed the course of Sudan’s history. After three decades under a brutal autocratic regime which particularly oppressed women, people united to demand change. One year after the revolution began, Inter Pares staff met with counterparts in Sudan and witnessed a country on the brink of transformation. We met with women who put their bodies and lives on the line for the future of their country. Their determination to see change was reflected in our conversations and in the many beautiful murals throughout Khartoum. 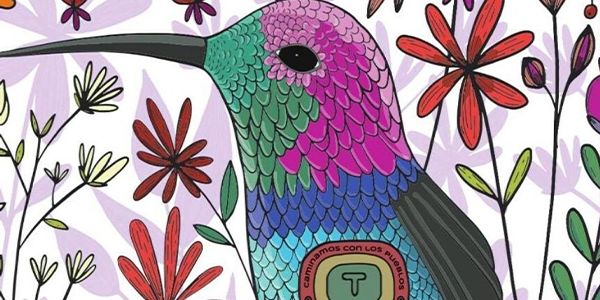 In December, civil society rallied around Inter Pares counterpart Centro de Derechos Humanos Fray Bartolome de las Casas (FrayBa) and human rights defenders in Chiapas, Mexico after FrayBa and defenders received a series of death threats. A petition was launched for their protection, which garnered international support. Founded in 1989, FrayBa works primarily with Indigenous communities to support them to overcome socioeconomic and political exclusion. More generally, the organization does documentation, research, advocacy and litigation for the promotion and defence of human rights in Chiapas. Sign the petition.